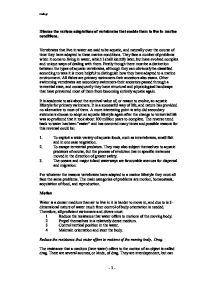 Discuss the various adaptations of vertebrates that enable them to live in marine conditions.

Discuss the various adaptations of vertebrates that enable them to live in marine conditions. Vertebrates that live in water are said to be aquatic, and naturally over the course of time they have adapted to these marine conditions. They face a number of problems when it come to living in water, which I shall identify later, but have evolved complex and unique ways of dealing with them. Firstly though there must be a distinction between the types of aquatic vertebrates, although they can obviously be classified according to taxa it is more helpful to distinguish how they have adapted to a marine environment. All fishes are primary swimmers-their ancestors also swam. Other swimming vertebrates are secondary swimmers-their ancestors passed through a terrestrial state, and consequently they have structural and physiological handicaps that have prevented most of them from becoming entirely aquatic again. It is academic to ask about the survival value of, or reason to evolve, an aquatic lifestyle for primary swimmers. It is a successful way of life, and nature has provided no alternative to most of them. A more interesting point is why did secondary swimmers choose to adopt an aquatic lifestyle again after the change to terrestrial life was so profound that it took about 100 million years to complete. The reverse trend back to water has been "easier" and has occurred many times and possible reasons for this reversal could be: 1. To exploit a wide variety of aquatic foods, such as invertebrates, small fish and in one case vegetation. 2. To escape terrestrial predators. They may also subject themselves to aquatic predators of course, but the process of evolution has in specific instances moved in the direction of greater safety. 3. The oceans and major inland waterways are favourable avenues for dispersal and migration. For whatever the reasons vertebrates have adapted to a marine lifestyle they must all face the same problems. ...read more.

Secondly they have the ability to produce two types of oil in their liver, squalene (HC 65%) and lipids (HCO 35%). These oils are of differing densities and by careful control of the amount of production of them they can alter their overall density and therefore their position in the water column. Teleost fish have a different approach to maintenance of their vertical position in the water. The first is gas gulping, obviously this is not good for deep water diving due to the compression of gas. Another method developed from early Devonian fishes that had a pair of pouched outgrowths from the pharynx that served as lungs. These later developed into swim bladders, gas filled sacs, which can be used to alter the buoyancy of the fish. They work via the root effect where O2 is pumped from the blood into the cavity by altering the acidity of the blood. A similar selective production of lipids occurs in a number of teleosts, their storage being in muscle, skin, or skull, and in the surviving coelacanth, which has a fat-filled gas bladder. Secondary swimmers have no such specific adaptations to the buoyancy problem they all rely on simple density adaptations to help them. The bones of diving birds are less pneumatic. Their air sacs are reduced (loons, penguins). They press their feathers against the body to exclude air. Auks bubble constantly when underwater, and the feathers of some diving birds become wet. Penguins achieve a density of 0.98. Mammals that dive deep may hyperventilate before submerging, but they do not fill their lungs. Indeed, they may exhale before diving. Deep-diving whales have relatively small lungs. Sirenia, which may feed while resting on the bottom or standing on their tails, have unusually heavy skeletons; their ribs are swollen and solid. Likewise, the skeleton of the hippopotamus is unusually heavy. Marine turtles such as the leatherback turtle have adapted a softer carapace in order to decrease their overall density. ...read more.

See below as to how this adaptation could of come about: A jaw provides the organism the ability to open its mouth and by causing a pressure difference in the surrounding water "suck" the prey towards it. It also allows the organism to get a firm grasp on its prey and with the addition of teeth it can cut up its prey into smaller pieces and becomes more nutritious. The jaw also allows manipulation of objects such as the ability to dig holes, carry pebbles for a nest and grasp mates. Reproduction Due to the hypertonic environment of the sea the chondrichthyes have developed the high urea content of their blood. However this ability does not develop until late embryology and so the eggs of these species cannot simply be released in the sea unlike the teleost fishes. Two solutions are used, both requiring internal fertilisation, in fact chondrichthyes were the first vertebrates to develop this. 1 Enclose the egg in an impervious case filled with isotonic fluid before depositing it in the sea. 2 Retain the eggs and embryos within the mothers body until they are capable of coping with the marine environment, viviparity. Secondary swimmers also have internal fertilisation and rely on one of the two methods above. Most sea snakes are viviparous and give birth at sea, as did the ichthyosaurs. Other reptiles and all birds lay their eggs or give birth on land. Among aquatic mammals, the walrus and hippopotamus sometimes give birth in the water, and Cetacea and Sirenia always do so. A single, large, precocious young is born at a time. Cetacea deliver rapidly; the calf emerges tail first. The mother whirls in the water, thus snapping the relatively short umbilical cord at a predetermined point of weakness. The newborn swims to the surface and takes its first breaths sometimes aided by the mother. In summary the adaptations of marine vertebrates display a lot of convergent evolution, showing that within such a homogenous environment as the sea there are not many ways of diversification as there are on land. ...read more.