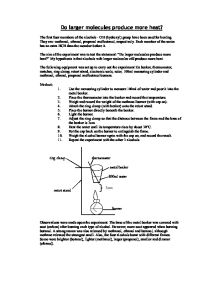 Do larger molecules produce more heat? The first four members of the alcohols - OH (hydroxyl) group have been used for heating. They are: methanol, ethanol, propanol and butanol, respectively. Each member of the series has an extra HCH than the member before it. The aim of the experiment was to test the statement: "Do larger molecules produce more heat?" My hypothesis is that alcohols with larger molecules will produce more heat. The following equipment was set up to carry out the experiment: tin beaker, thermometer, matches, ring clamp, retort stand, electronic scale, ruler, 100ml measuring cylinder and methanol, ethanol, propanol and butanol burners. Method: 1. Use the measuring cylinder to measure 100ml of water and pour it into the metal beaker. 2. Place the thermometer into the beaker and record the temperature. 3. Weigh and record the weight of the methanol burner (with cap on). 4. Attach the ring clamp (with beaker) onto the retort stand. ...read more.

Some were brighter (butanol), lighter (methanol), larger (propanol), smaller and dimmer (ethanol). The four alcohols were weighed before and after the experiment. The table shows the amount of fuel used: Fuel Used (g) Methanol 1.16 Ethanol 1.3 Propanol 1.1 Butanol 0.95 The amount of heat supplied by the different alcohols can be compared by using the equation to calculate the temperature rise for a standard number of molecules: ? ? temperature rise (oC) = Number of g of alcohol Butanol produced the most heat while methanol produced the least. Also, butanol is the most efficient fuel out of the four since it used up the least fuel to heat water by 30oC. In conclusion, the more atoms the molecules have, the more heat produced. Therefore, large molecules do produce more heat. As many variables as possible were controlled. ...read more.

Safety precautions were taken into account. All of the used alcohols were slightly toxic if ingested or inhaled, highly flammable and caused some form of irritation following prolonged exposure. Among them, methanol was the most toxic. It is recommended to use eye and skin protection during exposure to these alcohols. A fuel is a store of chemical energy. Some of the properties 'perfect' fuels have are being replaceable, easily combustible, safe to store, leaves little waste and does not cause pollution. Methanol (CH3OH), used as a fuel or disinfectant in surgical operations, is a smog-forming, toxic air pollutant that has a negative environmental impact as it contributes to CO emissions. Ethanol (C2H5OH), mainly used in burners to measure heats of combustion, is a smog-forming, air toxin but offers significant greenhouse gas benefits. Propanol (C3H7OH), used in the polymer industry and as a rocket propellant, has no significant negative environmental impact as we are readily exposed to it. Butanol (C4H9OH), used as a solvent, is biodegradable and won't cause any major environmental impacts. ...read more.