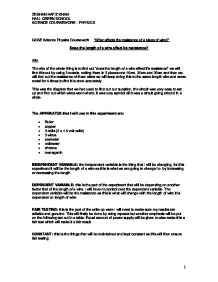 Does the length of a wire affect its resistance?

GCSE Science Physics Coursework     “What affects the resistance of a piece of wire?”

Does the length of a wire affect its resistance?

The aim of the whole thing is to find out “does the length of a wire affect it’s resistance” we will find this out by using 3 metals, cutting them in 3 pieces one 10cm, 20cm and 30cm and then we will find out the resistance of them wires we will keep doing this to the same length wire and same metal for 5 times to find it is done accurately.

This was the diagram that we had used to find out our question, the circuit was very easy to set up and find out which wires went where, it was very symbol all it was a circuit going around in a circle.

The APPARATUS that I will use in this experiment are:

INDEPENDENT VARIABLE: the independent variable is the thing that I will be changing, for this experiment it will be the length of a wire as this is what we are going to change i.e. by increasing or decreasing the length. 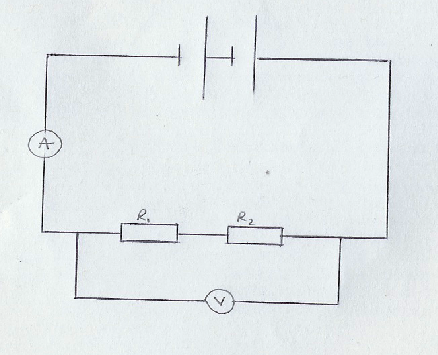 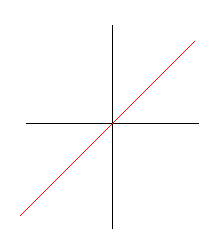 The length and resistance should be directly proportional to each other. So the graph will be diagonal through the origin.

We have done a pretest so that we can decide which thickness of wire to use, and what the highest current we will use will be. From an earlier experiment we know that the thicker the wire is the less likely it is to affect the resistance, therefore it will be ideal to use a thick wire instead of a thin one in our experiment. Therefore we have chosen to use a wire that measures 24 SWG to find out our results. We also have to decide what the highest current we will use will be; we have also done an experiment before for this. It shows that the current (I) is proportional to the voltage (v), this is ohms law.