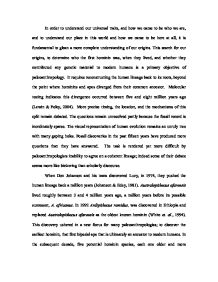 In order to understand our universal traits, and how we came to be who we are, and to understand our place in this world and how we came to be here at all, it is fundamental to glean a more complete understanding of our origins. This search for our origins, to determine who the first hominin was, when they lived, and whether they contributed any genetic material to modern humans is a primary objective of paleoanthropology. It requires reconstructing the human lineage back to its roots, beyond the point where hominins and apes diverged from their common ancestor. Molecular testing indicates this divergence occurred between five and eight million years ago (Lewin & Foley, 2004). More precise timing, the location, and the mechanisms of this split remain debated. The questions remain unresolved partly because the fossil record is inordinately sparse. The visual representation of human evolution remains an unruly tree with many gaping holes. Fossil discoveries in the past fifteen years have produced more questions than they have answered. The task is rendered yet more difficult by paleoanthropologists inability to agree on a coherent lineage; indeed some of their debate seems more like bickering than scholarly discourse. When Don Johanson and his team discovered Lucy, in 1974, they pushed the human lineage back a million years (Johanson & Edey, 1981). Australopithecus afarensis lived roughly between 3 and 4 million years ago, a million years before its possible successor, A. africanus. In 1992 Ardipithecus ramidus, was discovered in Ethiopia and replaced Australopithecus afarensis as the oldest known hominin (White et. al., 1994). This discovery ushered in a new focus for many paleoanthropologiss; to discover the earliest hominin, that first bipedal ape that is ultimately an ancestor to modern humans. In the subsequent decade, five potential hominin species, each one older and more controversial, were discovered. Currently there are four contenders for the start of the human race: Ardipithecus ramidus, Ardipithecus kadabba, Orrorin tugenensis, and Sahelanthropus tchadensis (Gibbons, 2006). ...read more.

And like Ar. ramidus, this location has presented geological and paleobiological data that demonstrates this earliest hominin derives from a relatively wet and wooded environment that was modulated by tectonic, volcanic and litoral processes. The accompanying fossil faunal remains support this (Wolde-Gabriel et. al., 2001). Ar. kadabba's combination of derived and primitive traits has led some to contest its hominin status and claim that it is an ancestor of modern chimpanzees. Early hominins can be expected to show a mosaic of ape- and human-like characters. Ar. kadabba's classification is based on its dental fossils. The severe lack of postcranial remains and the transitional teeth makes it impossible to prove that this new discovery is a hominin. Two paleoanthropologists who dispute Ar. kadabba's status as a hominin are Martin Pickford and Brigitte Senut, who discovered even older fossils in the Lukeino formation at the Tugen Hills of Kenya. The volcanic tuff layer these fossils were found in dates to between 5.8 and 6.1 million years ago. They designated a new genus for their potential species, naming it Orrorin tugenensis, which translated to 'Original Man from Tugen' (Pickford & Senut, 2001). So far 20 fossils have been found, most from the expeditions in 2000 and 2001, but one from 1974 whose phylogenetic status has been contentious since its discovery (Gibbons, 2006). The bones come from at least 5 individuals and consist of several limb bone fragments, including a femur and humerus, several mandibular fragments, a single manual phalanx, and some assorted, isolated teeth. As with Ar. kadabba dental remains of O. tugenensis are the most plentiful fossils. The upper incisor is described as robust, and is smaller in size than Australopithecus and similar in size to Ardipithecus. Like all other known hominins (except Ardipithecus) O. tugenensis has thick enamel. It is about the same thickness as modern H. sapiens. Its small molars are also comparable in size and shape to modern humans (Pickford & Senut, 2001). ...read more.

This hominin falls within the range of variation of A. afarensis and may eventually prove to be A. afarensis, but regardless Brunet has demonstrated that early hominins occupied a much wider area than previously thought. If S. tchadensis is proven to be a hominin, it may indicate that human evolution occurred in central Africa rather than West Africa as previously assumed (Gibbons, 2006). The fossils from Chad provide further evidence that the earliest humans likely inhabited a wooded, forested environment. The rich fauna from the Toros-Menalla layer includes a significant aquatic component including fish, crocodiles and amphibious mammals, as well as those associated with gallery forest and savannah, such as primates, rodents, equids, bovids, and elephants (Vignaud et. al., 2002). Brunet assumes that S. tchadensis lived near a lake but not far from a desert; this is the oldest record of desert conditions in the Neogene of northern central Africa. Paleoanthropologists have already begun to reconsider the environment in which the ape-hominin split occurred and they may soon have to reconsider the geographical location as well. New fossil discoveries raise new debates regarding the origins of our species and its evolution. Old assumptions are tossed out, new hypothesis are supported. None of these four species can yet be definitively labeled a hominin, and the human phylogenetic tree revised and redrawn. The paleoanthropologists must first unearth further postcranial remains to prove conclusively that 'their' potential hominins were obligate bipeds, which is the defining characteristic of humankind (Gibbons, 2006). Many fossil finds have undergone periods of intense criticism where notable researchers have denied the remains belonged to a hominin, these arguments were only resolved with the discovery of new fossil evidence. Re-examination of previous finds can seldom resolve complex issues of fossil morphologies and evolutionary relationships. Until this new evidence is found the paleoanthropological community will debate on. And, while it remains unsure which species may have contributed what traits to human evolution, it seems certain that the more we can learn of the roots of our phylogenetic tree the more we can learn of the roots of what defines us as human beings. ...read more.