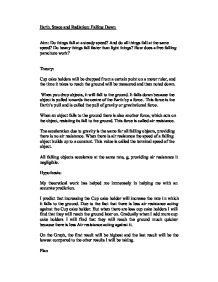 Earth, Space and Radiation: Falling Down.

Earth, Space and Radiation: Falling Down Aim: Do things fall at a steady speed? And do all things fall at the same speed? Do heavy things fall faster than light things? How does a free falling parachute work? Theory: Cup cake holders will be dropped from a certain point on a meter ruler, and the time it takes to reach the ground will be measured and then noted down. When you drop objects, it will fall to the ground. It falls down because the object is pulled towards the centre of the Earth by a force. This force is the Earth's pull and is called the pull of gravity or gravitational force. When an object falls to the ground there is also another force, which acts on the object, resisting its fall to the ground. This force is called air resistance. The acceleration due to gravity is the same for all falling objects, providing there is no air resistance. When there is air resistance the speed of a falling object builds up to a constant. This value is called the terminal speed of the object. All falling objects accelerate at the same rate, g, providing air resistance it negligible. ...read more.

If this were not so you find out that when you added more cup cake holders it would not reach the ground quickly. However my predictions about, if I put seven cup cake holders together well I predicted that it will reach the ground in 0.65 seconds, I was nearly right as, but it reached the ground 0.67 seconds so I was very close. I drew my graph as a straight line it started very high and ended very low. This is because at that stage there was less air resistance. In some way we could relate this too a free falling parachute. It uses the fact that air resistance opposes (acts against) the motion of parachute to control there fall through the air. Overall, my graph and my results supported my predictions fully. My idea that the more Cup cake holders the faster it will reach the ground was comprehensibly backed up my results. Which was very good. Evaluation: Overall, I would state the experiment as a success since my predictions were supported by my results. This Cup cake holder investigation was probably not performed as accurately as it could have been due to some controllable and uncontrollable conditions. ...read more.

Due to the high rates of photosynthesis of the pondweed, readings should be taken within shorter time periods. I had originally chosen to count the number of bubbles in two minute but these produced miscounts in the readings. If during a repeated experiment, counting bubbles is still used, there is a smaller chance for human error when counting within a smaller time frame. If the capillary tube option was to be chosen, volume should be measured for a smaller time frame to reduce the overall time to complete the experiment. Due to the nature and convenience of the experiment, it could be easily modified to investigate another variable of photosynthesis. Since sodium hydrogen carbonate (NaHCO3) is used to provide the pondweed with carbon dioxide. Performing the experiment with different volumes of NaHCO3 could vary the amount of CO2. The plant would be kept at a constant distance from the lamp and a constant volume of water would be added to the sodium hydrogen carbonate. Although I feel that my experiment was sound overall, I thought there were many points at which the accuracy was not perfect. As I have already stated, mostly due to the fact that I was relying on all the bubbles being the same size, which they clearly weren't, however many of the smaller inaccuracies also apply to my main experiment. By L Itam ...read more.