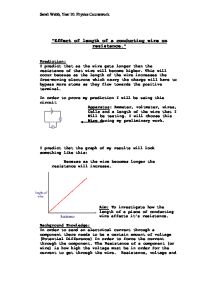 Effect of length of a conducting wire on resistance

“Effect of length of a conducting wire on resistance.”

I predict that as the wire gets longer then the resistance of that wire will become higher. This will occur because as the length of the wire increases the free-moving electrons which carry the charge will have to bypass more atoms as they flow towards the positive terminal. 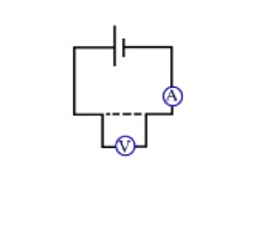 Cells and a length of the wire that I

Will be testing. I will choose this

Wire during my preliminary work.

I predict that the graph of my results will look something like this:

Because as the wire becomes longer the resistance will increase. 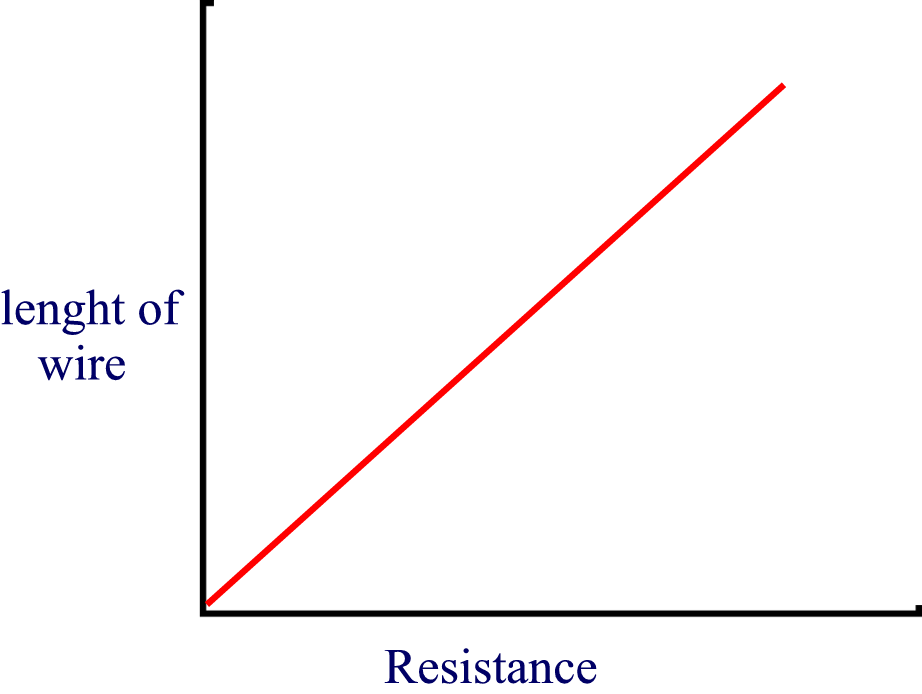 Aim: To investigate how the length of a piece of conducting wire affects it’s resistance.

The factors effecting my investigation are:

My preliminary results show that the copper wire I have tested has such a low resistance that to get a result that I am able to plot on a graph I would have to use a lot more wire than I intend to use for my actual experiment.

In my preliminary work I have also decided how many cells I would be using, first of all I tried a power pack, this did not appear to be working so I switched it for three cells, these cells increased the heat of the wire so that the resistance became excessively large. I decided to use only one cell, this meant that the resistance became lower and I was able to handle the wire as it was at a normal temperature.

Controlling the experiment: The number of cells used in the circuit should stay the same throughout as if the cell is older then it will have a lower voltage than a younger cell, also the wires used to connect the components into a circuit should also stay the same. The same type of Ammeter and Voltmeter should also be used in order to fully control the experiment. The length of wire being tested should be measured accurately against a ruler and clipped tightly into the circuit. The experiment should also be repeated for many different lengths in order to get accurate results and so that picking out anomalous data is easier. 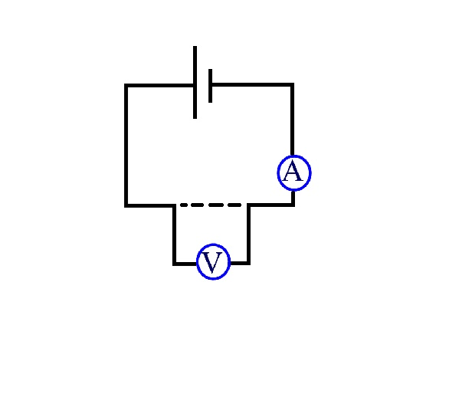 The dimension of the wire could be changed as if the dimensions of the wire were increased then I think that the resistance would decrease because the electrons would find it easier to get through the wire, because there would be more space for the stream of electrons to fit through without colliding with the atoms in the wire.

The dimension of the wire could also be very easily measured (as it is usually pre-measured when you get it) which means that the experiment would be easy to carry out.

The temperature would be very hard to measure for a lab experiment, as the temperature would have to be increased at a standard interval and kept at that temperature until the wire was tested also the experiment could not be done on an ordinary bench mat as they tend to melt at high temperatures. Possibly some sort of heated container could be made, like a dry water bath. This would make the temperature easy to monitor and keep continuous. The extension of the study