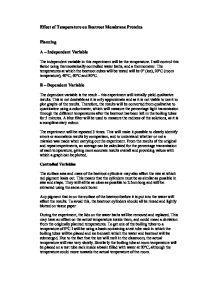 Effect of Temperature on Beetroot Membrane Proteins Planning A - Independent Variable The independent variable in this experiment will be the temperature. I will control this factor using thermostatically controlled water baths, and a thermometer. The temperatures at which the beetroot cubes will be tested will be 0� (ice), 20�C (room temperature), 40�C, 60�C and 80�C. B - Dependent Variable The dependant variable is the result - this experiment will initially yield qualitative results. This is not desirable as it is only approximate and as it is not viable to use it to plot graphs of the results. Therefore, the results will be converted from qualitative to quantitative using a colorimeter, which will measure the percentage light transmission through the different temperatures after the beetroot has been left in the boiling tubes for 5 minutes. A blue filter will be used to measure the redness of the solutions, as it is a complimentary colour. The experiment will be repeated 3 times. This will make it possible to clearly identify errors or anomalous results by comparison, and to understand whether or not a mistake was made when carrying out the experiment. From the results of the original and repeat experiments, an average can be calculated for the percentage transmission of each temperature, giving more accurate results overall and providing values with which a graph can be plotted. ...read more.

This trend may be a result of damage to the cell membranes of the beetroot. Denaturation of the carrier proteins within the phospholipid bi-layer would be a result of high temperatures and would allow substances (red pigment) to leak from inside the cell. Damage could also have been done to the phospholipids due to high temperatures, allowing pigment to escape into the water. This is not as likely as it would be had the beetroot been heated in ethanol, in which phospholipids are soluble. At lower temperatures (3.5�C - 40�C), less damage is done to components of the fluid-mosaic model. This is shown by smaller amounts of pigment having entered the water, allowing more transmission of light through the solution. At 40�C to 60�C however, the graph shows a larger decrease in percentage transmission. There is more pigment in the water at these temperatures. This could be because a temperature higher than the optimum has denatured some of the proteins in the cell membranes of the beetroot. Over temperatures 60�C - 80�C the graph shows more of a decrease in percentage transmission. This indicates that most of the proteins in the cell membrane were destroyed at these temperatures, causing the most pigment to leak out. The graph implies that as the temperature rises, more pigment can leak out of the beetroot cell, and the lower the percentage transmission will be. ...read more.

Samples were taken from different parts of the beetroot, due to the assumption that the beetroot was the same the whole way through. It is possible that there was more red pigment in a certain part, or that cells in one part were damaged more easily by high temperatures than those in another. The outer cells may be more resilient in order to prevent damage to the main part of the beetroot. The boiling tubes were stirred using a stirring rod when they were removed from the water baths, but there could still have been some more concentrated red pigment left at the bottom of some the tubes when the solution was being poured into the cuvettes. The boiling tubes at lower temperatures also had more time than the higher as they were put in first. The time taken to remove lids of water baths, place boiling tubes into the test tube racks and replace the lids again was approximately 20 seconds, and timing was started once the last boiling tube was in place. The extra 20 seconds may have altered the results for the Ice (3.5�C) and Room (19�C) temperature results.The water levels in the water baths varied - meaning that some of the water in the test tubes may not have been fully submerged. ...read more.

This piece of coursework answers the question well, analysing data collected to back up their conclusion. Scientific terms are used well to describe why the correlation occurs, but in my opinion it would've been better written a different way round. ...

This piece of coursework answers the question well, analysing data collected to back up their conclusion. Scientific terms are used well to describe why the correlation occurs, but in my opinion it would've been better written a different way round. I tend to start with a hypothesis and explain the scientific concepts which led to this reasoning, then address how close the results were in the conclusion. I liked the strength of evaluation in this essay, and an improvement could be to suppose solutions to the limitations and then repeating the experiment again.

The analysis in this piece is sound. The data is displayed clearly in a table, and some numerical calculations have been done to find the average of the repeats. I would note that when putting data in tables, you can be penalised if there are inconsistencies with the number of decimal places. Similarly, it doesn't make much sense to have the average being more precise than the results themselves. Further analysis could be done with the data, and I think a key skill which needs to be shown at GCSE is graph drawing. Being able to draw a graph with correct axes and then form a line of best fit (which people commonly think must be a line, but it can be a curve) will enable a piece of coursework to reach the top marks.

A key concept when looking at temperature is the amount of kinetic energy. I liked how this essay mention how as temperature increases, the kinetic energy increases and thus the vibrations become more vigorous. They speak about the fluid-mosaic model and denaturation strongly. I also liked their discussion of qualitative data not being useful, so posing a way of getting quantitative data from their experiment by using a colorimeter. Understanding terms such as these shows an able candidate!

This experiment is written up very well. Technical terms are used when necessary, and grammar is used to emphasise the arguments.