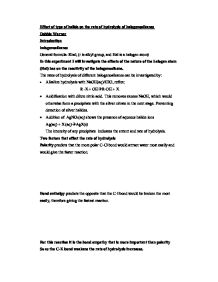 Effect of type of halide on the rate of hydrolysis of halogenoalkanes Debbie Warner Introduction halogenoalkanes General formula- Rhal, (r is alkyl group, and Hal is a halogen atom) In this experiment I will investigate the effects of the nature of the halogen atom (Hal) has on the reactivity of the halogenoalkane. The rates of hydrolysis of different halogenoalkanes can be investigated by: * Alkaline hydrolysis with NaOH(aq)/H2O, reflux: R-X + OH-->R-OH + X * Acidification with dilute nitric acid. This removes excess NaOH, which would otherwise form a precipitate with the silver nitrate in the next stage. Preventing detection of silver halides. * Addition of AgNO3(aq) shows the presence of aqueous halide ions Ag(aq) + X (aq)-->AgX(s) The intensity of any precipitate indicates the extent and rate of hydrolysis. Two factors that effect the rate of hydrolysis Polarity predicts that the more polar C-Cl bond would attract water most easily and would give the faster reaction. Bond enthalpy predicts the opposite that the C-I bond would be broken the most easily, therefore giving the fastest reaction. ...read more.

It is important to wear eye protection when working with any chemicals that are irritant. Also long hair should be tied back. The halogenoalkanes are harmful when inhaled so every effort should be made not to breathe them in. Also as the chemicals used are highly flammable (1-iodobutane is flammable) it is important to take special care while working with and around them especially when near naked flame. Stoppers should be replaced straight away after use and kept well away from naked flames. Also to cuts and broken skin should be covered, and hands should be washed after handling the chemicals. If contact with skin does occur it should be washed with cold water immediately. Method * Water was heated in the beaker to just over 50oC(measured with thermometer in water) then the heat was removed and beaker left to rest. * Next six test tubes were placed in a rack. * Into three 1cm of ethanol was added (to each), these tubes were then labelled chloro, bromo and iodo then 2 drops of the corresponding halogenoalkane was added. ...read more.

The second point where I can see a small fault in accuracy is the use of a standard pipette for measuring the chemical, a more accurate method of measuring would have been to use a graduated pipette but again I do not believe this has greatly effected my results. The thirdly that I have identified as causing my results to be less accurate is the fact that the finishing point of the experiment was only judged with the human eye and time recorded using human reflexes. So it was perhaps wrong to have recorded the times to 1/100 of a second, as it would take many hundredths of a second for the stopwatch to be pressed. Finally that the finishing point of the experiment was not clearly defined so it was hard to tell when the exact same amount of precipitate had been formed. If I were to do the experiment again I may have investigated the effect of the positioning of the halide atom in the molecule using for example both 1-bromobutane and 2-bromobutane. ...read more.