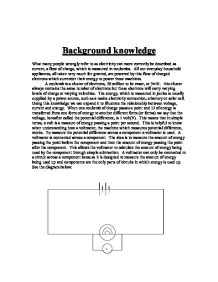 Background knowledge What many people wrongly refer to as electricity can more correctly be described as current, a flow of charge, which is measured in coulombs. All our everyday household appliances, all taken very much for granted, are powered by this flow of charged electrons which surrender their energy to power these machines. A coulomb is a cluster of electrons, 30 million to be exact, or 3?10 . this cluster always contains the same number of electrons but these electrons will carry varying levels of charge at varying velocities. The energy, which is measured in joules is usually supplied by a power source, such as a mains electricity connection, a battery or solar cell. Using this knowledge we can expand it to illustrate the relationship between voltage, current and energy. When one coulomb of charge passes a point and 1J of energy is transferred from one form of energy to another different form (or forms) we say that the voltage, hereafter called the potential difference, is 1 volt(V). This means that in simple terms, a volt is a measure of energy passing a point per second. This is helpful to know when understanding how a voltmeter, the machine which measures potential difference, works. To measure the potential difference across a component a voltmeter is used. A voltmeter is connected across a component. ...read more.

The power supply which comes from the power plant is always a standard 240V. This is quite a high Voltage, and, although it is necessary to power some appliances, it is also too great for other appliances to cope with. If 240V passed through these appliances they would be incapable of containing this level of energy and they would be destroyed. This is where resistors come into play. A resistor is a component placed in a circuit specifically designed to dissipate some of the energy being carried by the coulombs. it does this by providing a certain amount of resistance and therefore forcing the coulomb to surrender some of the energy it is carrying in order to pass through the resistor. This means that after the coulombs pass through the resistor they carry lower voltages. By placing a resistor in a circuit before the low voltage component you can determine the amount of energy which will pass through it, and only allow a safe level to pass. Resistors can be fixed or variable. The resistance (in ohms) of a fixed resistor can be read by looking at the coloured lines around the middle of it. Variable resistors, or rheostats, can be adjusted manually. Rheostats are also used to control volume by the volume knob on your stereo, temperature in an element such as the dial on an electric fire and speed of a motor, like the speed buttons on an electric fan. ...read more.

It is these free electrons which increase the conductivity of the material and therefore lower the Resistivity. The ohmic graph or V I graph is used to illustrate the relationship between potential difference and current according to ohm's law. Ohm's law states that current is directly proportional to potential difference. That is to say that if you double the potential difference then you shall double the current. Ohm's law states that: The current flowing through a metallic conductor is directly proportional to the potential difference across its ends if all the conditions remain constant. Temperature included This can be displayed in a VI graph as shown below. Also included are the graphs for lower resistance(red) and for higher resistance(blue). The resistance of an ohmic conductor is shown as green: Finally. It is necessary to note that potential difference, current and resistance(as stated previously) behave differently both in series and in parallel circuits. In series 1. Voltage splits across components 2. current remains constant 3. the sum of the resistances of all the components is equal to the total resistance of all the components In parallel 1. potential difference remains constant in all branches of the circuit and does not split at a parallel branch. 2. however, current does split at a parallel branch 3. and the total resistance is found by the equation: 1/Rt = 1/R1 + 1/R� as described previously. ...read more.