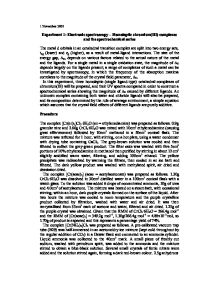 1 November 2003 Experiment 1: Electronic spectroscopy - Homoleptic chromium(III) complexes and the spectrochemical series The metal d orbitals in an octahedral transition complex are split into two energy sets, t2g (lower) and eg (higher), as a result of metal-ligand interactions. The size of the energy gap, ?O, depends on various factors related to the actual nature of the metal and the ligands. For a single metal in a single oxidation state, the magnitude of ?O depends largely on the ligands present; a range of complexes of such a metal can be investigated by spectroscopy, in which the frequency of the absorption maxima correlates to the magnitude of the crystal field parameter, ?O. In this experiment, three homoleptic (single ligand-type) octahedral complexes of chromium(III) will be prepared, and their UV spectra compared in order to construct a spectrochemical series showing the magnitude of ?O caused by different ligands. An unknown complex containing both water and chloride ligands will also be prepared, and its composition determined by the rule of average environment, a simple equation which assumes that the crystal field effects of different ligands are purely additive. Procedure The complex [Cr(en)3]Cl3�3H2O (en = ethylenediamine) was prepared as follows. ...read more.

in water slightly acidified with nitric acid; [Cr(acac)3] in toluene; unknown chromium(III) complex. The unknown complex was prepared by mixing anhydrous CrCl3 with 10cm3 0.1M sulphuric acid in a test tube, expelling oxygen by adding solid CO2, and adding a few drops of 2% zinc/mercury amalgam. All the spectra recorded are shown below. Measurements The peaks observed in each spectrum were as follows: [Cr(en)3]Cl3: 460nm, m 360nm, m 350nm, m KCr(SO4)2�12H2O: 580nm, w 400nm, w 250nm, s [Cr(acac)3]: 563nm, s 436nm, s 330nm, s Unknown complex: 600nm, w 400nm, w ~300nm, s Additional reference spectra: K3[Cr(CN)6]: 380nm, s 310nm, s CrCl3 (anhydrous): 699nm, m 519nm, s Discussion The splitting of d orbitals in transition complexes, as described by crystal field theory, is paramount to the understanding of their properties. One of the most immediate consequences of orbital splitting is the striking coloration of most d-metal complexes, owing to the fact that the energies of electron transition between orbitals (the d-d transitions) tend to correspond to radiation in the visible and ultraviolet regions. In this experiment, UV spectroscopy was used to investigate these d-d transitions in a range of prepared and pre-prepared homoleptic chromium(III) complexes in order to investigate the degree of orbital splitting caused by various ligands. ...read more.

Ligands containing the same elements tend to appear close to each other in the series, and that is observed in the series above. 3. The rule of average environment states that ? (MXaYb) = a/a+b ? (MXa+b) + b/a+b ? (MYa+b). In this case ? (MXaYb) is the highest frequency (or, equivalently, wavenumber) of absorption for the unknown compound, and is 16700cm-1; ? (MXa+b) is that for the chrome alum and is 17200cm-1; ? (MYa+b) is that for CrCl3 and is 14300cm-1. The equation thus gives a = 5 and b = 1, hence the primary coordination sphere in the unknown compound is [Cr(H2O)5Cl]2+. Conclusion In this experiment, three homoleptic compounds of chromium(III) were prepared: [Cr(en)3]Cl3�3H2O in reasonable yield, [Cr(acac)3] in good yield, and [Cr(NH3)6]Cl3 in poor yield. UV spectra were recorded for the first two of these compounds, and for chrome alum, KCr(SO4)2�12H2O. Analysis of the lowest energy peak in each spectrum allowed a spectrochemical series of these ligands (including two further ligands provided by reference spectra) to be constructed. An unknown complex of chromium(III) containing both water and chloride ligands was formed by chromium(II)-catalysed dissolution of CrCl3 in water; UV analysis and the rule of average environment allowed determination of its primary coordination sphere as [Cr(H2O)5Cl]2+. ...read more.