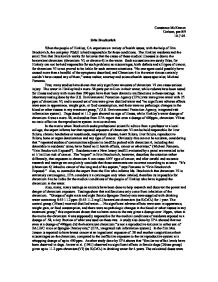 Constance McKinnon Carlson, per.8/9 10-7-03 Erin Brockovich When the people of Hinkley, CA experience a variety of health issues, with the help of Erin Brockovich, the company PG&E is held responsible for these conditions. The Hinkley residents and the small firm that Brockovich works for believes that the cause of these medical illnesses is due to the hexavalent chromium (chromium VI, or chrome 6) in the water. Such accusations are surely false, for Hinkely can not be held responsible for such problems as miscarriages, birth defects and all types of cancer, for chromium VI is not proved to be liable for such extreme situations. "No one agent could possibly have caused more than a handful of the symptoms described, and Chromium 6 in the water almost certainly couldn't have caused any of them," states author, attorney and science/health issues specialist, Michael Fumento. First, many studies have shown that only significant amounts of chromium VI can cause serious injury. The water in Hinkley had a mere .58 parts per million in their water, while rodents have been tested for illness and only with more than 200 ppm have their been dramatic malfunctions in these testings. ...read more.

Also, many, many testings on animals have been done to help research and discover the power and danger of chromium exposure. Testings show that malfunctions only come from inhalation of the chromium. "Groups of eight male and eight female Sprague-Dawley rats were supplied with drinking water containing 0.45-11.2 ppm (0.45-11.2 mg/L) hexavalent chromium (as K2CrO4) for 1 year. The control group (10/sex) received distilled water.....No significant adverse effects were seen in appearance, weight gain, or food consumption, and there were no pathologic changes in the blood or other tissues in any treatment group," this experiment shows that no harm came to the rats given a dosage over 10ppm, when in the movie the chromium 6 was supposedly responsible for the medical conditions of residents exposed to a dosage of .58, a tiny fraction of what was used on these rats. A study also done by EPA showed that not even at a dosage of 400ppm did the hexavalent chromium "is not a reproductive toxicant in either sex of BALB/C mice or Sprague-Dawley rats," (EPA, integrated risk information system). In the film Mrs. Jenson is reported to have breast cancer at an ingestional exposure of .58 and another couple blame their miscarriages on the chromium, compared to the ineffective exposure to the rat reproductive system at a whopping dosage of up to 400 ppm. ...read more.

(Michael Fumento, "The Truth About 'Erin Brockovich'"). This is something to take into consideration, not only is the death rate not either the same or higher at the PG&E plant, but its significantly lower when compared to other Californians. If this is happening at the source of the chromium VI, then what is the reason and where is the proof that it is responsible for the illnesses that the plaintiffs in Hinkley claim? Another report given by the Monday Morning Briefing (Associate of Metropolitan Water Agencies) tells us that "There is no evidence that hexavalent chromium causes cancer in humans when ingested in drinking water, according to an expert panel convened by the California Office of Environmental Health and Hazard Assessment (OEHHA)." Study and report after report shows that there is no reason for hexavalent chromium to be blamed for most of the medical conditions in the film because there is no proof that this is so. The plaintiffs in Hinkley complain of being diagnosed with their illnesses through the chromium in the water, how can this be so when "only a small amount can dissolve in water and move deeper in the soil to underground water," (Agency for Toxic Substances and Disease Registry) and when it has already been made clear that there is no scientific proof that this substance causes cancer when ingested. ...read more.