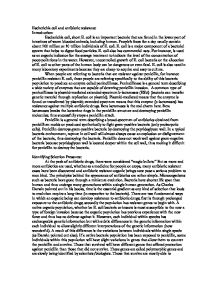 Escherichia coli and antibiotic resistance Introduction: Escherichia coli, short E. coli is an important bacteria that are found in the lower part of intestines of warm blooded animals, including human. People's feces for a day usually contain about 100 million or 10 trillion individuals of E. coli. E. coli is a major component of a bacterial system that helps to digest food particles. E. coli also has commercial uses. For instance, is used as an organic indicator for the sewage treatment to indicate the level of the concentration of poop pollutions in the water. However, uncontrolled growth of E. coli bacteria or the allocation of E. coli to other parts of the human body can be dangerous or even fatal. E. coli is also used in many laboratory experiments because they are cheap to acquire and easy to culture. When people are referring to bacteria that are resistant against penicillin, for instance penicillin resistant E. coli, these people are referring specifically to the ability of this bacteria population to produce an enzyme called penincillinase. Penincillinase is a general term describing a wide variety of enzymes that are capable of deterring penicillin invasion. A common type of penincillinase is plasmid-mediated extended-spectrum b-lactamases (ESbl) (bacteria can transfer genetic material through replication or plasmid). ...read more.

The third possible explanation of antibiotic bacteria is mutations. However, this process is least likely to happen. In most cases, mutation tends to destroy organic beings but on rare conditions, mutation can destroy a particular gene that controls the production of penincillinase, which maybe produced in large quantities to destroy penicillin. Problem: What effect does penicillin, an antibiotic drug has on different groups of E. coli bacteria? Hypothesis: Native E. coli, such as those that are found on feral animal excretions are extremely sensitive to any antibiotic drugs and therefore most susceptible to any antibiotic drugs. However, those populations that already contain resistance to antibiotic drugs, or those that have survived prolonged exposure to antibiotic drugs will have a stronger resistance against penicillin. Prediction: According to past experiments, those E. coli bacteria populations that have weak or no resistance against penicillin will have the lowest diameter of the zone of inhibition because the drug will prohibit the bacteria to grow and thus limits the size in the petri dish that the bacteria will occupy. Any E. coli population with the strongest antibiotic resistance against penicillin will have the largest diameter of the zone of inhibition because the antibiotic resistance will allow this population to overcome the antibiotics and therefore will occupy a larger area in the petri dish. ...read more.

*****
An ambitious investigation described in detail and showing a clear understanding of the relevant theory.