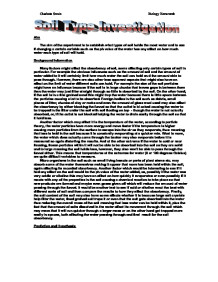 Establish what types of soil holds the most water and to see if changing a certain variable such as the ph value of the water has any effect on how much water each type of soil will hold.

Aim The aim of the experiment is to establish what types of soil holds the most water and to see if changing a certain variable such as the ph value of the water has any effect on how much water each type of soil will hold. Background Information Many factors might affect the absorbency of soil, some affecting only certain types of soil in particular. For example the obvious influences such as the amount of soil and the amount of water added to it will certainly limit how much water the soil can hold and the amount able to pass through. However, there are also other less apparent aspects that might also have an effect on the limit of water different soils can hold. For example the size of the soil particles might have an influence because if the soil is in large chunks that leaves gaps in between them then the water may just filter straight through so little is absorbed by the soil. On the other hand, if the soil is in a fine grained sand this might trap the water because there is little space between the particles causing a lot to be absorbed. Foreign bodies in the soil such as debris, small pieces of litter, chunks of clay or rocks and even the amount of glass wool used may also effect the absorbency by either blocking the funnel so that the outlet is blocked causing the water to be trapped in the filter under the soil with soil floating on top - though the water is not actually absorbed, or, if the outlet is not blocked helping the water to drain easily through the soil so that it hold less. Another factor which may effect it is the temperature of the water, according to particle theory, the water particles have more energy and move faster if the temperature is higher causing more particles from the surface to escape into the air as they evaporate, thus meaning that less is held in the soil because it is constantly evaporating at a quicker rate. ...read more.

It was decided that the amount of glass wool for each test would have to change and was finally set at 0.05g instead, a tenth of the original size ensuring that some water would be able to pas through for measuring yet no soil particles. We also discovered after doing the experiment once that 2 minutes was not long enough for the all water to drain through as much of it seem to build up on the top of the soil. Consequently we decided that we would give it and extra 30 seconds setting the time at 2 minutes 30 and this seemed to work very well with the majority of the water either passing through the funnel or being absorbed into the soil. This improved the experiment by making it more worthwhile and actually gave us some results to analyse and measure. Fair Test and Safety Precautions To ensure that the test is fair it has already been decided that between each test all the equipment will be washed and new sample of soil and glass wool used each time as not to contaminate the containers and distort the results. Equal amounts of soil used in the filters as well as water and acid added to the beakers has been set as controlled quantities that will be used throughout the test - 15g of soil, 47ml of water with 3ml (A pipette full) of acid and alkali added each time. The time of each test has also been managed and was set at 2 minutes 30 ensuring that each individual experiment is allowed the same time limit for fairer results. As a safety precaution safety goggles should be worn when handling the acids and alkalis and great care should be taken at all times to reduce the risk of injury because acids are harmful, especially to the skin. All equipment should be set up at a reasonable distance from the edge of the desk to reduce spillage and accidents especially if corrosive substances are being used. ...read more.

Some results seemed less reliable not following regular patterns and often being of extreme quantities either low or high, again this could have been the result of contamination, in accurate equipment, unreliable soil samples - not following the characteristics of these samples found naturally or just systematic errors e.g. the result of being careless, spillage, inaccurate measuring and timing or accidental contamination due to problem with cleaning the equipment which had to be done many times after each test. Possibly the experiment could be done again yet with less data to collect or a least less in the time given meaning that more care can be taken with cleaning apparatus resulting in less contamination, difficulties and overall more accurate results. Further work may include testing the soil samples to more accurate degrees of ph values instead of just acidic, alkaline and neutral and possibly more samples e.g. ph values from 1 - 14 and not just the extremes and central. On trypes of chemical could be tested more thoroughly with a certain types of soil e.g acidic water with only clay soil, larger samples could be used and possibly a rain gauge could be set up in the ground too see the average amount of rain that falls on the soil and then this amount could be used in the lab for more real life like results. Possibly soil types from different areas could be tested with water of different ph's to give a more accurate picture of soil absorbency across the British isles with possible explanations to the results found based on chemicals present, the vegetation growing there, the amount of rain fall, the types of rock its is found near, the contour of the land and the properties of the soil. An investigation such as this would certainly help agriculture and farming giving those who ork with the land ideas where soil would be fertile, where it would be barren and why. It would help biologists discover reasons for certain habitats and geographers possible reasons for landforms and how the landscape has been shaped etc. Charlotte Swain Biology Homework ...read more.