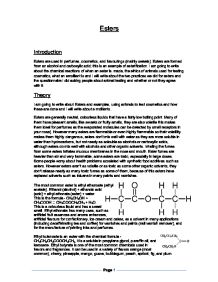 Esters. Esters are formed from an alcohol and carboxylic acid; this is an example of esterification. I am going to write about the chemical reactions of when an ester is made, the ethics of animals used for testing cosmetics, what an emollient is and I w

Esters Introduction Esters are used in perfumes, cosmetics, and flavourings (mainly sweets). Esters are formed from an alcohol and carboxylic acid; this is an example of esterification. I am going to write about the chemical reactions of when an ester is made, the ethics of animals used for testing cosmetics, what an emollient is and I will write about the two practices we did for esters and the questionnaire I did asking people about animal testing and whether or not they agree with it. Theory I am going to write about Esters and examples, using animals to test cosmetics and how these are done and I will write about emollients. Esters are generally neutral, colourless liquids that have a fairly low boiling point. Many of them have pleasant smells, like sweets or fruity smells, they are also volatile this makes them ideal for perfumes as the evaporated molecules can be detected by smell receptors in your nose). However many esters are flammable or even highly flammable so their volatility makes them highly dangerous, esters don't mix well with water as they are more soluble in water than hydrocarbons, but not nearly as solouble as alcohols or carboxylic acids, although esters do mix well with alcohols and other organic solvents. Inhaling the fumes from some esters irritates mucous membranes in the nose and mouth. Ester fumes are heavier than air and very flammable, some esters are toxic, espessially in large doses. Some people worry about health problems acosiated with synthetic food additives such as esters. However esters aren't as volatile or as toxic as some other organic solvents, they don't release nearly as many toxic fumes as some of them, because of this esters have replaced solvents such as toluene in many paints and varnishes. The most common ester is ethyl ethanoate (ethyl acetate). Ethanol (alcohol) + ethanoic acid (acid) = ethyl ethonate (ester) ...read more.

I will also make sure that they use the exact same amount of shampoo on their hair as it may affect the results. Conclusion I think that using animal testing is ok but only if its for medical uses because e that could most probably save a life. In the UK in 2000 1,607,000 mice were used, 535,000 rats were used, 71,500 other rodents, 39,700 rabbits were used, 11,600 carnivore animals were used, 63,000 hoofed animals were used, 3,700 primates, 500 other mammals, 124,200 birds, 15,600 reptiles and 243,000 fishes were used in animal testing. This is by far a lot and many of these animals have died in this process. I think that animal testing does work as it has helped to develop vaccines against diseases like rabies, polio, measles, mumps, rubella and TB. Other things rely on animal tests such as Antibiotics, HIV drugs, insulin and cancer treatments because other testing methods aren't reliable enough. I also think that it is in some cases a good thing because it is better than using humans and them dying, but it is also a bad thing because deaths through medical research are absolutely unnecessary and are morally no different from murder so the poor animals are dying for no particular reason. I think that testing cosmetic on animals is wrong because basically, this is a very inhuman practice caused by humans on animals. These various tests carried out on animals is not a guarantee for using cosmetics on our skin since animals react differently to certain chemicals as compared to humans. Cosmetic testing on animals cannot be considered to be completely reliable. It can cause permanent damage to animals. To sum up I think that animal testing is ok but only if it's used for medical research that can really help prevent diseases to humans. But I think that they should be treated like how you would treat a human and they should have to feel no pain at all. ...read more.