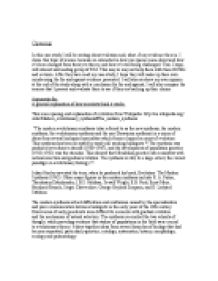 Evolution, what, and any evidence is there?

﻿Opening In this case study I will be writing about evolution and, what, if any evidence there is. I chose this topic of science because im interested in how our species came about and how it?s been changed from theory to theory, and how it?s still being challenged. This, I hope, will interest and reading group of KS4. This may or may not help them with there GCSEs and revision. After they have read my case study, I hope they will make up there own minds using the for and against evidence presented. I will also so show my own opinion at the end of the study along with a conclusion for for and against, I will also compare the sources that I present and evaluate them to see if they are backing up their claims. Arguments for. A general explanation of how scientists think it works. This is an opening and explanation of evolution from Wikipedia: http://en.wikipedia.org/wiki/Modern_evolutionary_synthesis#The_modern_synthesis ?The modern evolutionary synthesis (also referred to as the new synthesis, the modern synthesis, the evolutionary synthesis and the neo-Darwinian synthesis) is a union of ideas from several biological specialties which forms a logical account of evolution. This synthesis has been accepted by nearly all working biologists.[1] The synthesis was produced over about a decade (1936?1947), and the development of population genetics (1918?1932) was the stimulus. This showed that Mendelian genetics was consistent with natural selection and gradual evolution. The synthesis is still, to a large extent, the current paradigm in evolutionary biology.[2] Julian Huxley invented the term, when he produced his book, Evolution: The Modern Synthesis (1942). Other major figures in the modern synthesis include R. A. Fisher, Theodosius Dobzhansky, J.B.S. Haldane, Sewall Wright, E.B. Ford, Ernst Mayr, Bernhard Rensch, Sergei Chetverikov, George Gaylord Simpson, and G. Ledyard Stebbins. The modern synthesis solved difficulties and confusions caused by the specialization and poor communication between biologists in the early years of the 20th century. ...read more.

Of a list of 86 put together by Robert Wiedersheim, one of Darwin?s disciples, only a handful remain ambiguous at the present time. Scientists have discovered important functions for all of the rest.? ?Similarly, we do not know much about Pseudo genes. Scientists believe that they are genes which have lost their function through mutation. As John Woodmorappe explains, ?Arguments for shared evolutionary ancestry have been advanced based on the similarities in perceived disablements found in orthologous pseudo genes (counterpart pseudo genes in other primates).? Woodmorappe goes on to say however, ?. . .A close examination shows that this presumed evidence is equivocal. Dissimilarities between the pseudo genes of presumably related organisms are at least as prominent as the similarities, and similarities in orthologous pseudo genes can arise independently of shared evolutionary ancestry.? I got this source from http://www.allaboutcreation.org/dna-evidence-for-evolution-faq.htm but its doesn't say who it was by or when. Its by a creationist site (religious) but its their scientific creationist version where they explain how god made the world. They are claiming similarities between living things and their DNA. Its showing this with factual information, like that we share 96% of DNA with chimps. The Missing Link:In Human Evolution. ?Scientists have discovered an exquisitely preserved ancient primate fossil that they believe forms a crucial "missing link" between our own evolutionary branch of life and the rest of the animal kingdom. The 47m-year-old primate ? named Ida ? has been hailed as the fossil equivalent of a "Rosetta Stone" for understanding the critical early stages of primate evolution. The top-level international research team, who have studied her in secret for the past two years, believe she is the most complete and best preserved primate fossil ever uncovered. The skeleton is 95% complete and thanks to the unique location where she died, it is possible to see individual hairs covering her body and even the make-up of her final meal.? ?The fossil's amazing preservation means that the scientific team has managed to glean a huge amount of information from it, although this required new X-ray techniques that had not previously been applied to any other specimens. ...read more.

Its was called The Creation Story - Bible Story Summary. This is a belief and not a scientific explanation of life on earth, as It has no proof of what its claiming, it has no solid scientific explanation of what its putting forward. The evaluation of this is its not able to back up its claims with a good enough argument. How could we be made so complex? ?The instructions for how to build, operate, and repair living cells represent a vast amount of information (estimated at 12 billion bits). Information is a mental, non-material concept. It can never arise from a natural process and is always the result of an intelligence. Just as a newspaper story transcends the ink on the paper, life?s DNA itself (like the ink) is not the information, it is simply a physical representation or housing of the information (the story). Modifying the DNA via mutation can never produce new genetic information to drive upward evolution, just as spilling coffee on the newspaper, thereby modifying the distribution of the ink, will never improve the story. This picture of a cell is from http://www.truthnet.org/Christianity/Apologetics/Godlogical3/cell.jpg 2. Formation of Life ?Non-living chemicals cannot become alive on their own. The cell is a miniature factory with many active processes, not a simple blob of ?protoplasm? as believed in Darwin?s day. Lightening striking a mud puddle or some ?warm little pond? will never produce life. This is another view of the core issue of information as the simplest living cell requires a vast amount of information to be present. The ?Law of Biogenesis? states that life comes only from prior life. Spontaneous generation has long been shown to be impossible (by Louis Pasteur in 1859). Numerous efforts to bring life from non-life (including the famous Miller-Urey experiment) have not succeeded. The probability of life forming from non-life has been likened to the probability of a tornado going through a junkyard and spontaneously assembling a working 747 airplane. The idea that life on earth may have been seeded from outer space just moves the problem elsewhere.? I got this source from http://emporium.turnpike.net/C/cs/top. ...read more.

****
This quite an ambitious piece of work which attempts to review published material on the evidence for evolution as well as outlining the objections of opponents. In some cases the best use of available information sources has not been made but it is a creditable effort with very good evaluations of those sources used.