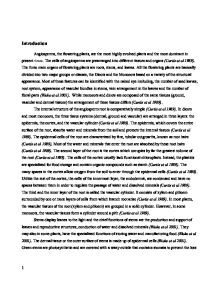 Examine the root, stem and leaf tissue layers of monocotyledonous and dicotyledonous plants.

Conclusion: The root, stem, and leaf cells of monocots and dicots were studied in this experiment. Distinct differences were observed between monocot and dicot root, leaf, and stem cells in this experiment. It was found that monocots had no pattern in the placement of vascular tissues but dicots had a circular or cross shaped patterns. Error Analysis The margins for errors in this experiment were very low because the slides were pre-prepared and were labeled correctly. The samples were all clearly visible. There is a possible error which is that some cells were pretty similar that it was hard to distinguish between them. So, there could be some errors in labeling the cells that were drawn. Another possible error that could have occurred is when calculating the size of the specimen or in its magnification. Application The information learned in this experiment can be used when distinguishing between monocots and dicots in the future. For example, a farmer can examine the leaves of a plant and decide whether the plant is monocot or dicot, which may help him to choose the type of fertilizers to use or the type of plant that will give him maximum produce. Also, it will be useful to know the differences between monocots and dicots, when planting trees since monocots tend to have weak herbaceous stems. ...read more.