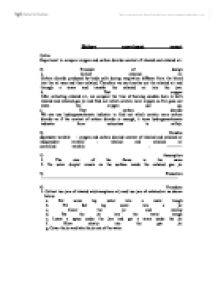 Biology experiment report 1)Aim Experiment to compare oxygen and carbon dioxide content of inhaled and exhaled air. 2) Principle of design a. Collect exhaled air Carbon dioxide produced by body cells during respiration diffuses from the blood into the air sacs and then exhaled. Therefore we can breathe out the exhaled air and through a straw and transfer the exhaled air into the jaw. b. Test oxygen After collecting exhaled air, we compare the time of burning candles burn in both inhaled and exhaled gas jar and find out which contain more oxygen as fire goes out when the oxygen use up. c. Test carbon dioxide We can use hydrogencarbonate indicator to find out which contain more carbon dioxide as if the content of carbon dioxide is enough, it turns hydrogencarbonate indicator from colourless to milkly. ...read more.