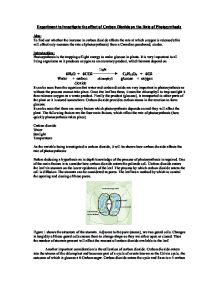 4. Then get another 0.2grams of sodium hydrogen carbonate and add it to the beaker. Take the temperature and begin counting the number of bubbles again for one minute. 5. Keep adding 0.2grams of NaHCO3 until 1 gram is reached. 6. Throughout the experiment make sure the lamp is always the same distance from the beaker to prevent light becoming an influencing factor. Preliminary Work: Preliminary work that was done was to measure the amount of oxygen bubbles released from the elodea when the plant has different amounts of carbon dioxide in the water. This was done to try and test whether or not the amount of CO2 would affect the rate of photosynthesis. Below the results of the preliminary experiment are shown: No. Of oxygen bubbles released CO2-NahCO3 concentration (grams) 1st result 2nd result 3rd result Average Temp. Of water �C 0 2 4 2 3 19 0.4 212 229 208 216 23 0.8 402 462 398 421 24 1.2 512 487 499 498 25 From the results it can be seen as the amount of sodium hydrogen carbonate added is increased, the number of oxygen bubbles released also increases. However, it can be seen that the difference between the first result and the next is decreasing; this shows that the reaction is reaching the substrates limit. The results prove that saturation is taking place in the plant. It also shows that when there was no carbon dioxide added, bubbles were still being produced, this was because the plant uses the carbon dioxide available in the atmosphere. Modifications The following modifications will be made to the way the experiment would be carried out after the preliminary experiment had been done: 1. The concentration amounts will be changed from being 0.4grams each time to 0.2grams. The reason for this change was because, 0.4g was producing many results and when another amount of 0.4g would be added it would be very difficult to count all the bubbles being produced. ...read more.

Thus a slight increase in carbon dioxide result in a sharp increase in the rate of reaction. But when the concentration of carbon dioxide is high another factor will become limiting i.e. the factor in short supply. At the high concentrations of carbon dioxide another factor becomes limiting, thus an increase in carbon dioxide no longer results in such a sharp increase. It can be concluded that the results obtained back up the original prediction that was made, but it is also clear as photosynthesis is affected by many factors simply doubling the carbon dioxide would not double the rate of reaction. Thus this indicates that the quantitative prediction given was incorrect. Evaluation: The techniques that have been used can be said to have been suitable for the desired task, the reason for this is that the results that have been obtained show a clear trend and also directly correlate with the prediction that was made. Also a procedure was obtained that allowed the accurate measurement of the rate of photosynthesis with the concentration of carbon dioxide as the variable. The results that were obtained were reliable and consistent. Also they had a high level of repeatability, as the difference between repeated readings was small again enhancing the reliability of the results. This is a clear indication that a suitable method and technique was used. The reliability of the experiment was high due to the fact that the repeated readings for each concentration are very close for example at 0.2M the difference in the change in mass is only 0.01g. The experiment was also reliable because variables were controlled such as the temperature were kept the same. Also the apparatus was accurate and to high precision meaning that the results were reliable. The evidence for this is that the difference between repeated readings is small and also apart from the one anomalous result all the others lie close to the line of best fit indicating that the results were reliable. ...read more.