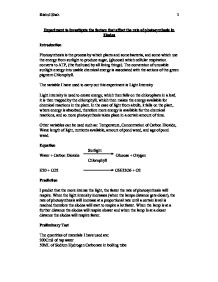 Experiment to investigate the factors that affect the rate of photosynthesis in Elodea Introduction Photosynthesis is the process by which plants and some bacteria, and some which use the energy from sunlight to produce sugar, (glucose) which cellular respiration converts to ATP, (the fuel used by all living things). The conversion of unusable sunlight energy into usable chemical energy is associated with the actions of the green pigment Chlorophyll. The variable I have used to carry out this experiment is Light Intensity Light intensity is used to create energy, which then falls on the chloroplasts in a leaf, it is then trapped by the chlorophyll, which then makes the energy available for chemical reactions in the plant. In the case of light from a bulb, it falls on the plant, where energy is absorbed, therefore more energy is available for the chemical reactions, and so more photosynthesis takes place in a certain amount of time. Other variables can be used such as: Temperature, Concentration of Carbon Dioxide, Wave length of light, nutrients available, amount of pond weed, and age of pond weed. Equation Sunlight Water + Carbon Dioxide Glucose + Oxygen Chlorophyll H20 + CO2 C6H12O6 + O2 Prediction I predict that the more intense the light, the faster the rate of photosynthesis will respire. ...read more.

Safety Hot water Thermometer Dangerous Chemicals (Sodium Hydrogen Carbonate) List of Apparatus Lamp Boiling Tube Boiling Tube Rack Stop clock Beaker Clamp Detailed Method 1. Firstly the boiling tube was filled with Sodium Hydrogen Carbonate and then the Elodea was placed in. 2. Next you create a water bath using 150cm3 of tap water which leaves you with 19-20 degrees Celsius. 3. Then the boiling tube filled with Sodium Hydrogen Carbonate is placed inside the water bath 4. The boiling tube is then clamped with a clamp stand but still remaining in the water bath 5. The lamp was then placed 5cm away from the water bath 6. You then start your stop clock and leave it running for 10minutes and then the pond weed should start to form a reaction which starts to produce bubbles. 7. You then count the amount of bubbles formed within three minutes. 8. When you have completed those following steps you repeated them three times for each distance. 9. You use these five different distances which are: 5cm, 10cm, 15cm, 20cm, & 25cm. Diagram to show the method used Results Distance Amount of Bubbles Average 1 2 3 5cm 48 56 61 55 10cm 22 31 59 37.33 15cm 23 23 24 54 20cm 13 ...read more.

Evaluation Overall, I would state the experiment as a success since my predictions were supported by my results. This is important in reflecting success only if my prediction was sensible and logical. Just as important is where the experiment was not a success and why. This photosynthesis investigation was probably not performed as accurately as it could have been due to some controllable and uncontrollable conditions. Some mistakes can be corrected. While performing the experiment, the piece of pond weed did not photosynthesize at a steady rate, even when the distance from the plant to the light source was kept at a constant rate. The second reading at 10cm was far greater than the first reading at 5 cm. While the number of oxygen bubbles was being recorded, the rate at which the plant was photosynthesizing had increased several times. This may be due to the poor circulation of sodium hydrogen carbonate at the beginning of the experiment, nutrients which are not available, wave length of the light, amount of pond weed and age of pond weed. Temperature was also another factor that was controlled by the lamp being used. The heat inside the laboratory would also vary, and also the heat outside. All of the reasons given above evaluate what problems went wrong during my experiment. ?? ?? ?? ?? 1 Rishul Shah ...read more.