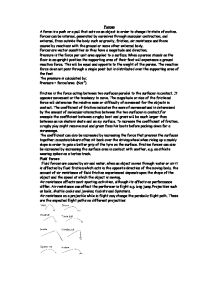 A force is a push or a pull that acts on an object in order to change its state of motion.

Forces can be internal, generated by ourselves through muscular contraction, and external, from outside the body such as gravity, friction, air resistance and those caused by reactions with the ground or some other external body.

Forces are vector quantities so they have a magnitude and direction.

The pressure is calculated by;

Fluid forces are caused by air and water, when an object moves through water or air it is affected by fluid friction which acts in the opposite direction of the moving body. the amount of air resistance of fluid friction experienced depends upon the shape of the object and the speed at which the object is moving.

Air resistance affects most sporting activities, although its affects on performance differ. Air resistance can affect the performer in flight e.g. long jump, Projectiles such as balls, shuttle cocks and javelins, Cyclists and Sprinters.

Air resistance on a projectile while in flight may change the parabolic flight path. These are the expected flight paths on different projectiles: 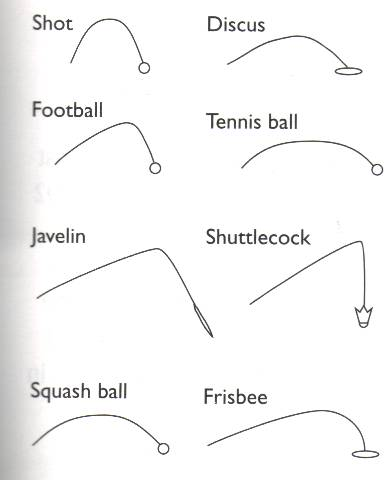 Flight paths can be categorised as:

Speed of the swimmer. The relationship between speed and drag is positive – the faster you swim, the greater the drag. In competitive swimming the swimmers have to swim as fast as they can so there is little they can do to prevent the increased drag so they have to adopt an efficient technique that minimises drag yet enables fast swimming.

Gravity is an external force that naturally occurs and pulls a body or object towards the centre of the earth. Newton’s law of gravitation states:

Due to the immense difference between the mass of the earth and object involved in sporting activity, the gravitational force of attraction between the two bodies is large, and has a significant effect upon performance.