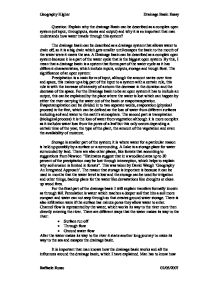 Explain why the drainage Basin can be described as a complex open system (of input, throughputs, stores and output) and why it is so important that man understands how water travels through this system?

There are also other places, like forests that according to suggestions from Newson "Estimates suggest that in a woodland area up to 30 percent of the precipitation may be lost through interception, which helps to explain why soil erosion is limited in forests". This was taken by David Waugh 'Geography An Integrated Approach'. The reason that storage is important is because it can be used in months that the water level is low and the storage can be used for irrigation and other things, backup plans for the water like devastations like droughts or close up wood fires. For the final part of the drainage basin I will explain transfers formally known as through fall. Percolation is water which reaches a deeper soil that hits a soil more compact and water can not seep through so that creates ground water storage. There is also infiltration were if the surface has minute pores they allow water to enter. Channel flow is represented by the water, which works its way to the river more then directly entering the river. ...read more.

There is also the fact of the relief, if the land is steep it will find the river in a quicker time. Obstructions like vegetation all need to be considered, as interception will cause it to slow down, on the other hand in the winter there is less surface area of the tree to intercept the precipitation as the leaves have dropped and exposed the land underneath. There are so many different things, which can affect the hydrographs even the temperature as it can make the surface hard that will increase surface runoff. One of the case studies that I have studied is the drainage basin of the Mississippi and I have found that man has investigated the main parts, as floods were occurring often, and they have took the necessary precautions and predictions to prevent floods. Different precautions they have taken are to put levees and build new dams, they have also deepened the rivers in the drainage basin and flood warning systems to warn the town of possible floods. Geography Higher Drainage Basin Essay Raffaele Russo 02/05/2007 ...read more.