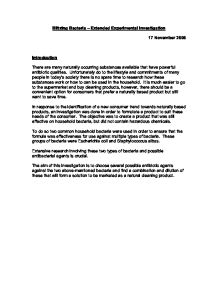 Blitzing Bacteria - Extended Experimental Investigation 17 November 2006 Introduction There are many naturally occurring substances available that have powerful antibiotic qualities. Unfortunately do to the lifestyle and commitments of many people in today's society there is no spare time to research how these substances work or how to can be used in the household. It is much easier to go to the supermarket and buy cleaning products, however, there should be a convenient option for consumers that prefer a naturally based product but still want to save time. In response to the identification of a new consumer trend towards naturally based products, an investigation was done in order to formulate a product to suit these needs of the consumer. The objective was to create a product that was still effective on household bacteria, but did not contain hazardous chemicals. To do so two common household bacteria were used in order to ensure that the formula was effectiveness for use against multiple types of bacteria. These groups of bacteria were Escherichia coli and Staphylococcus albus. Extensive research involving these two types of bacteria and possible antibacterial agents is crucial. The aim of this investigation is to choose several possible antibiotic agents against the two above-mentioned bacteria and find a combination and dilution of these that will form a solution to be marketed as a natural cleaning product. Alternate Hypothesis (H1) Tea tree oil Tea tree oil will be extremely effective. Honey Honey will have a limited effect. Garlic Garlic will be highly effective. Salt Salt will have a limited effect. Lemon Lemon will have a moderate effect. ...read more.

The modern method of harvesting the oil is by steam distillation of the pin-like leaves of the plant, Melaleuca alternifolia [http://www.mayoclinic.com/health/tea-tree-oil/NS_patient-teatreeoil]. Tea tree oil was not successful when used against E. Coli and had a limited effect on the S. Albus. The null hypothesis will be accepted and the alternate hypothesis will have to be rejected. This is because for a substance with such a well-known reputation as an antiseptic it showed relatively disappointing results. The low water activity of honey makes it a poor environment for growth of other organisms [http://en.wikipedia.org/wiki/Honey#Osmotic_effect]. Also, because of the high sugar levels of honey there is a high osmotic gradient, which can kill foreign cells, such as bacteria, by crenation. Honey was equally effective on both of the bacteria but the effects were still minimal. The alternate hypothesis will be accepted and this is because research showed that show that though honey has antibacterial properties and was a poor environment for bacteria these properties were still not as strong and powerful as other antiseptic substances. Garlic's main biological component, which contributes to its reputation as an antiseptic, is allicin. Allicin blocks thiols and disable groups of enzymes such as cysteine proteinases and alcohol dehydrogenases, which are vital for the pathogenicity of the bacterium. Garlic was expected to be highly effective and this proved to be true when tested on the E. Coli but showed no effect on the S. Albus. Of the original substances trialed garlic was the most effective substance when fighting the E. Coli bacteria therefore the alternate hypothesis will be accepted though it must be noted that there was no effect on the S. ...read more.

If such an investigation were to be done again some changes would be made. For increased accuracy at least three trials would be carried out for each substance tested and a wider range of substances, combinations and dilutions would be investigated. Also, different types of bacteria could be tested. Conclusion The investigation was designed to develop a product for the Hazchem Corporation, and this was achieved. The goal was to develop a product for consumers that were oriented towards buying product that were based on natural ingredients that could be environmentally friendly, free from harmful toxins and chemicals and also convenient. Six substances were tested using E. Coli and S. Albus. These substances were; tea tree oil, garlic, honey, salt, lemon and lime. Research was completed as to how each of these substances achieved their antibiotic properties. After testing which of these antibiotic agents could work well in combating both of these bacteria it was concluded that it was necessary to combine ingredients to create the most effective product possible. The most effective combination was found to be lemon, lime and garlic. Then was then diluted with water and it was observed that there was a minimal decrease in effectiveness. Therefore the final product was lemon, lime, garlic and water at a ratio of [1:1:1:3]. This will benefit the consumer and provide a product that will efficiently do the job and gives Hazchem the opportunity to reduce costs and increase profitability by diluting the solution. In conclusion many antibiotic substances were investigated and the final product was formulated. This means that an effective antibiotic product was created which can satisfy the needs of both the consumer and Hazchem. ...read more.