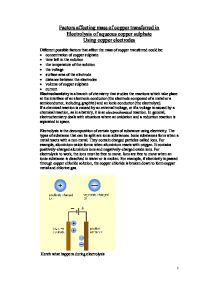 Factors affecting mass of copper transferred in Electrolysis of aqueous copper sulphate Using copper electrodes Different possible factors that affect the mass of copper transferred could be: * concentration of copper sulphate * time left in the solution * the temperature of the solution * the voltage * surface area of the electrode * distance between the electrodes * volume of copper sulphate * current Electrochemistry is a branch of chemistry that studies the reactions which take place at the interface of an electronic conductor (the electrode composed of a metal or a semiconductor, including graphite) and an ionic conductor (the electrolyte). If a chemical reaction is caused by an external voltage, or if a voltage is caused by a chemical reaction, as in a battery, it is an electrochemical reaction. In general, electrochemistry deals with situations where an oxidation and a reduction reaction is separated in space. Electrolysis is the decomposition of certain types of substance using electricity. The types of substance that can be split are ionic substances. Ionic substances form when a metal reacts with a non-metal. They contain charged particles called ions. For example, aluminium oxide forms when aluminium reacts with oxygen. It contains positively-charged aluminium ions and negatively-charged oxide ions. For electrolysis to work, the ions must be free to move. Ions are free to move when an ionic substance is dissolved in water or is molten. For example, if electricity is passed through copper chloride solution, the copper chloride is broken down to form copper metal and chlorine gas. Here's what happens during electrolysis Positively charged ions move to the negative electrode. Metal ions and hydrogen ions are positively-charged, so metals or hydrogen gas are produced at the negative electrode. Negatively-charged ions move to the positive electrode. Non-metal ions such as oxide ions and chloride ions are negatively-charged, so gases such as oxygen or chlorine are produced at the positive electrode. ...read more.

Five results would give us more evidence when plotting the line on the graph so we would do it more accurately. A curve only needs five points so my results are sufficient and I am also doing 0 minutes as a control to show that without the current there is only a slight movement of the molecules which doesn't affect the mass of the cathode. To ensure that these results are accurate I am going to keep the other variables constant as referred to in fair test and by using a stopwatch to time as it is more accurate than a clock, only wiping the cathode slightly before weighing it so it doesn't rub any atoms off. I will also use the equipment to help me because the variable resistor can keep the current constant giving more reliable results, the crocodile clips will hold the electrodes firmly in place and by putting them into a sheet of cardboard we can ensure that the electrodes stay the same distance apart. The scales give a more precise 2dp reading and by using propane to clean between each set of results it ensures that we start from fresh again. This method is a good way of carrying out the investigation because the only way the ionic bonds in the solution can be broken apart; i.e. with a current and by weighing the piece of copper before and after we can find exact gains. I used the preliminary experiment as a way to find out the right conditions needed and found that 0.5A gave very precise readings that went up steadily. I also found to make it easier we could place a piece of cardboard on top of the beaker with holes in to put the crocodile clips through and this would keep the electrodes the same distance apart. Also by using tape we could tape the wires down to the table so they did not get in the way. ...read more.

copper sulphate ionic solution is with a current and if the solution didn't separate then the ions wouldn't have been free to build up on the cathode. Also as we were trying to find the weight gained after each interval the best way to do that quickly and efficiently is to weigh it before and then after to find out the difference. However if I was to do this experiment again I would improve the method by making sure that the same ammeter was used each time we tested the different concentrations to make it more accurate, to sandpaper each cathode for the same amount of time to ensure that I have cleaned them all the same and as the electrodes were moving around a lot even with the cardboard I would take the crocodile clips to the edge of the beaker so they stayed in the same position. Other than this the method was good because it fitted what I needed to find out in the aim. I think that our method gave reliable results and were almost correct because it almost followed Faraday's law and my predicted results ( going up by 0.02g) as it was almost a straight line. The graph showed a strong, clear pattern so the conclusion was reliable. All the repeats were almost exact to each other so the averages must have been quite reliable. However these results could not always be counted on as correct because just because the pattern was correct it doesn't mean that every experiment scientists do are correct. They have to redo them several times before they get satisfactory results. If we had better equipment like the professional scientists do or we knew also the factors about the experiment e.g. fair test then our results would be more accurate. Reliable means that the results are dependable whereas accurate means correct results. There is a fine line between them so reliable results are not the same as accurate results. ?? ?? ?? ?? 1 ...read more.