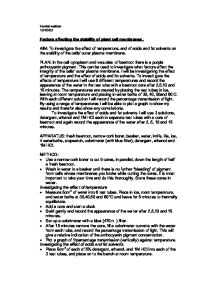 Harriet walden 13/10/03 Factors affecting the stability of plant cell membranes. AIM: To investigate the effect of temperature, and of acids and fat solvents on the stability of the cells' outer plasma membrane. PLAN: In the cell cytoplasm and vacuoles of beetroot there is a purple anthocyanin pigment. This can be used to investigate what factors affect the integrity of the cells' outer plasma membrane. I will be investigating the effect of temperature and the effect of acids and fat solvents. To investigate the effects of temperature I will use 6 different temperatures and record the appearance of the water in the test tube with a beetroot core after 2,5,10 and 15 minutes. The temperatures are created by placing the test tubes in ice, leaving at room temperature and placing in water baths of 30, 40, 50and 60 C. With each different solution I will record the percentage transmission of light. By using a range of temperatures I will be able to plot a graph to show my results and therefor also show any correlations. ...read more.

The other problem we had was that we had put the solutions into the cuvettes and colorimeter too soon after they had come out of the water baths. The high temperatures caused the cuvettes to condense and therefor when we put them in the colorimeter the transmission reading did not show the solution we had obtained but included the steamed up sides of the cuvette. We allowed the solutions to cool before putting them into the colorimeter again (this is when 1 tube was accidentally knocked over) and then recording the results we read. It was quite difficult to try and get all 9 beetroot samples the same size, although we used the same borer and cut them all the same length they were all quite small so it would have been easy for them to all be slightly different. By having the beetroot the same width and length they should have all had the same surface area, which would therefor allow the same amount of anthocyanin to leak. If we had measured the beetroot to have equal masses then they may have all had different surface areas, which would have made the experiment unfair in recording the integrity of plasma membrane. ...read more.