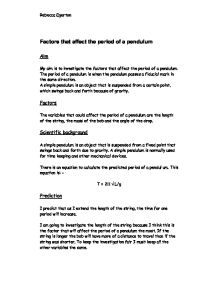 Factors that affect the period of a pendulum

Factors that affect the period of a pendulum

My aim is to investigate the factors that affect the period of a pendulum.

The period of a pendulum is when the pendulum passes a fiducial mark in the same direction.

A simple pendulum is an object that is suspended from a certain point, which swings back and forth because of gravity.

The variables that could affect the period of a pendulum are the length of the string, the mass of the bob and the angle of the drop.

There is an equation to calculate the predicted period of a pendulum. This equation is: -

I am going to repeat this experiment 3 times to make it a fair test. I am going to pull the strings back 50° from the fiducial mark for each length. This is so the investigation will be fair as I am keeping the angle of drop the same for each length of string. I will also be suing the same bob, so there will be no weight change.

From my results I can conclude that my results did prove my prediction, but if I wanted to do the experiment accurately would to use laser beams so that you can see exactly when the string passes the fiducial mark.

My results were not spot on. My line was slightly off compared to the predicted results line. This is because of human error. When using the stopwatch it is difficult to exactly start it and stop it when the bob passes the fiducial mark. The angle of drop could also have been slightly off. At 0.4m this result doesn’t really fit in with the pattern. This is an anomalous result. I think that this is slightly out because of human error as I have mentioned before.

My method was quite reliable. I don’t think that I would change any of it as I understood it well while I was doing my experiment.