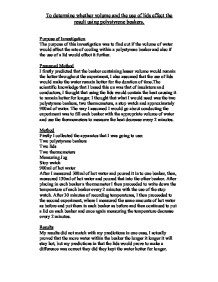 Purpose of Investigation The purpose of this investigation was to find out if the volume of water would effect the rate of cooling within a polystyrene beaker and also if the use of a lid would effect it further. Presumed Method I firstly predicted that the beaker containing lesser volume would remain the hotter throughout the experiment, I also assumed that the use of lids would make the water remain hotter for the duration of time.The scientific knowledge that I based this on was that of insulators and conductors, I thought that using the lids would contain the heat causing it to remain hotter for longer. ...read more.

Conclusion When the volume of water was more the water stayed hotter for longer and when it had a lid it stayed hot even longer this proves that polystyrene is an insulator for also the outside of the beaker was not hot to touch even when the water was at boiling point. This gives us reason to why McDonalds uses this material for their hot drinks beakers as they to not conduct heat they insulate it. ?? ?? ?? ?? To determine whether volume and the use of lids effect the result using polystyrene beakers. ...read more.