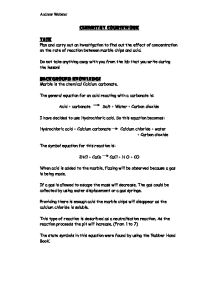 Find out the effect of concentration on the rate of reaction between marble chips and acid.

Chemistry Coursework Task Plan and carry out an investigation to find out the effect of concentration on the rate of reaction between marble chips and acid. Do not take anything away with you from the lab that you write during the lesson! Background Knowledge Marble is the chemical Calcium carbonate. The general equation for an acid reacting with a carbonate is: Acid + carbonate Salt + Water + Carbon dioxide I have decided to use Hydrochloric acid. So this equation becomes: Hydrochloric acid + Calcium carbonate Calcium chloride + water + Carbon dioxide The symbol equation for this reaction is: 2HCl + CaCo CaCl + H O + CO When acid is added to the marble, fizzing will be observed because a gas is being made. If a gas is allowed to escape the mass will decrease. The gas could be collected by using water displacement or a gas syringe. Providing there is enough acid the marble chips will disappear as the calcium chloride is soluble. This type of reaction is described as a neutralisation reaction. As the reaction proceeds the pH will increase. (From 1 to 7) The state symbols in this equation were found by using the 'Rubber Hand Book'. Prediction The input in this investigation is the concentration of Hydrochloric acid. The outcome is the rate of reaction. The higher the concentration the faster the rate of reaction because there will be more collisions between acid particles and calcium carbonate particles. This is because there are more Hydrochloric acid molecules in a higher concentration. ...read more.

* For the appearance method I found that the reactions were taking too long and that I would not be able to complete the experiment in the time given. * I was able to get a full set of results and to the best accuracy for the change in mass method so I have come to the conclusion that this is the best method to use. I will now repeat the change in mass method but this time I will use 10 cm of Hydrochloric acid instead of 20. I found that the percentage error is less for 20 cm so I will use this volume for my experiment. I also repeated the experiment with 0.5g of marble chips instead of 1g. I found that the percentage error is less for 0.5g so I will use this mass for my experiment. N.b. in an experiment for it to be classified as accurate the total errors must be less than 10%. The reliability is how small or large the range is. E.g. Exp.1 - 125, 126, 127 Avg. 126 Exp.2 - 136, 126, 116 Avg. 126 Experiment 1 is more reliable as it has a much smaller range. Plan First I will measure 0.5g of small marble pieces on a balance accurate to three decimal places then I will place the chips into a 100 cm conical flask. Measure 20 cm of 5M hydrochloric acid with a 25 cm measuring cylinder. Place the conical flask onto the balance accurate to three decimal places then add the hydrochloric acid and record the starting mass. ...read more.

There is one point on the graph that does not fit the pattern. Where as the difference between all the points before are gradually decreasing this point goes up, but the error bars for this point were fairly large so it is an unreliable piece of data. I think the method was suitable and worked well as overall I received a good set of data. I think my results have given me enough evidence to support my conclusion but I think that the experiment should be repeated so that I can investigate my original prediction better than in this experiment by changing the surface area of marble chips. I could also do further work by changing the chemical used, such as magnesium instead of calcium carbonate, to prove that the idea of the higher the concentration the faster the rate of reaction, works in the same way as in this experiment. To further improve this experiment I could conduct it in a place where such an accurate balance is less likely to be affected by foreign materials from the environment. The anomalies in the experiments for the 4 and 5M concentrations may be caused by the different amounts of surface area available and that some of the chips may have had slightly larger surface areas than in the other experiments which meant that more acid molecules could collide with the marble molecules. With a smaller concentration this would make very little difference but as the concentration gets to this level there are many more particles to take advantage of the extra surface area provided. It is very hard to keep the surface area the same with the given resources. Andrew Webster ...read more.