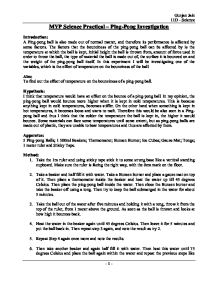 Find out the effect of temperature on the bounciness of a ping-pong ball.

Average of Try 1;2 and 3 (cm) 0 54.3 25 49.6 45 46 75 42.3 100 41.6 Data Analysis: From the graph below we can see a scatter graph that compares the temperature with the average of the height of the ball bouncing. From the graph we can see a existing relationship between both the factors. As the temperature increases the height that the ball bounces decreases. From the best-fit line, we can see that the height of the ball bouncing will keep dropping as the temperature increases. Conclusion: From the graph above, and the data analysis it can be concluded that my hypothesis was correct. I had earlier predicted that as the temperature would be decreased the height of the bounce of the ping-pong ball would increase. There is a confirmed relationship between the two variables and I have sufficient evidence to support my ideas. So the reason why these results have come up is quite simple. As the ball is kept in cold temperature, the particles inside the object come close together and thus become harder. On the other hand when the ball is kept in hot temperatures, the particles inside the ball matter start to move faster and move apart from each other. This therefore makes the ball expand into a egg shape. The ball is made out of plastic. ...read more.

instead of keeping the ball in hot water for a longer time, the time could be reduced in order to avoid the shape of the ball changing. * (for error 6) try the maximum to keep the ball inside the water, as this would affect all sides of the ball and have more accurate results. Errors 2, 3 cannot be improved on as they require taking readings. Taking readings can never be perfect and thus these errors cant be avoided. These errors cant be avoided by doing the experiment again or even changing the procedure as it is almost impossible to remove all possible sources of errors because there is always some source of human error and no instrument can be so perfect to give 100% accurate results. Extension: The experiment could be extended in the following methods, which are listed below: * By testing out more variables. Therefore rather than only testing temperature, more variables which are written in the introduction can be used to test the effect of the variables on a ping-pong ball. * By further developing the temperature experiment. By extending the experiment, we would have to consider the errors more carefully and try to follow the improvements. Then we could also have more temperature variables. Also we could have more tries and the ball could be thrown from different height in order to see the effects. Gunjan Jain 11D - Science - 1 - ...read more.