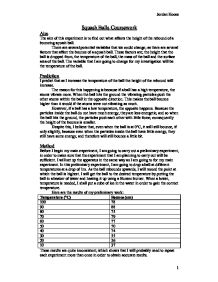 Find out what affects the height of the rebound of a bouncing squash ball.

The aim of this experiment is to find out what affects the height of the rebound of a bouncing squash ball.

I predict that as I increase the temperature of the ball the height of the rebound will increase.

The reason for this happening is because if a ball has a high temperature, the atoms vibrate more. When the ball hits the ground the vibrating particles push the other atoms within the ball in the opposite direction. This makes the ball bounce higher than it would if the atoms were not vibrating as much.

However, if a ball has a low temperature, the opposite happens. Because the particles inside the ball do not have much energy, they are less energetic, and so when the ball hits the ground, the particles push each other with little force; consequently the height of the bounce is smaller.

Despite this, I believe that, even when the ball

I will carefully watch the thermometer so that I will know when the correct temperature has been reached. When that temperature has been reached, I will take the ball out of the beaker using the tongs.I will then hold the ball 1m up from the ground. (I will measure this distance using a metre ruler.) I will drop the ball from this height and, as the ball rebounds upwards, I will record the point at which the ball is highest. (I will only measure this to the nearest centimetre, as it would be too difficult to measure it any more precisely.)

Here is a labelled diagram of the apparatus (not shown here are the tongs that were used to keep the ball underwater and to get the ball out of the glass beaker): 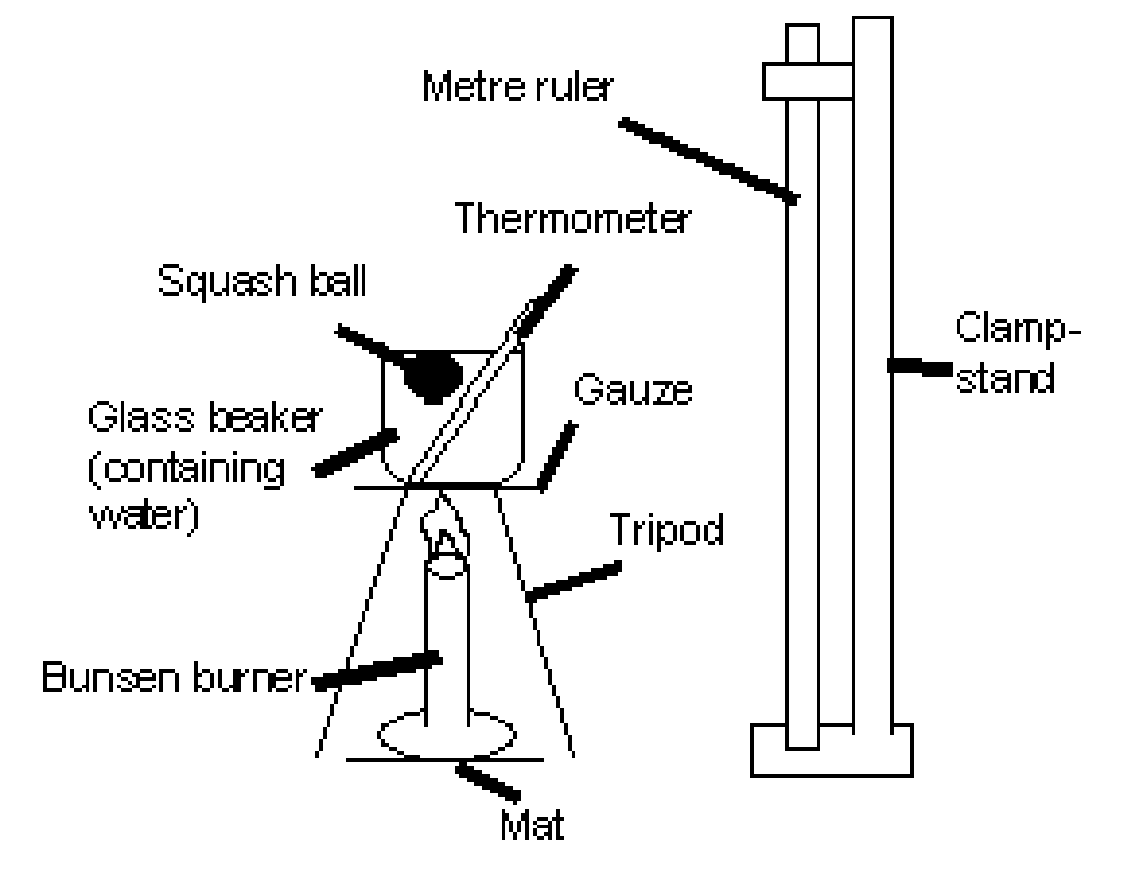 I will attempt to make sure that my results are reliable by repeating the experiment for each temperature three times. As I have already stated, the variable that I am going to change for this investigation will be the temperature. In order to ensure that bias is minimal in this investigation, I will need to control all of the other variables. These include the surface that the ball will be landing on, the type of ball (meaning that I will have to use the same ball for each experiment) and the height from which the ball will be dropped. (The surface that the ball will be landing on shall be the table.)

Another aspect of this investigation that was inaccurate was in the fact that when I dropped the ball, it sometimes bounced awkwardly against the clamp-stand, meaning I would have to drop the ball again. This happened several times during the investigation. Between the time that it bounced awkwardly and it was dropped again, the ball will have had time to cool down, so the ball may have been at a temperature of 88°C instead of 90°C.

Another inaccurate factor of this investigation was that it was very difficult to see the point at which the ball was highest, so an incorrect recording may have been written down at times. This problem could be resolved if I had a video-camera, so I would be able to play it back and get a closer look at when the ball is at it’s highest point.

I believe that all of these factors that I have mentioned contribute towards explaining the anomalous result in my results table. These inaccuracies also make my evidence unreliable to some extent, although I do believe that the evidence that I have gained from this investigation is reliable enough to confirm my belief in the relationship between the height of the bounce and the temperature of the ball. If I did want to confirm my belief in the trend, I could carry out experiments for more extreme temperatures, for example, 0°C or 110°C, and see if they confirm the trend.