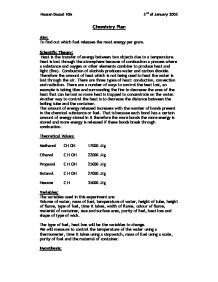 Find out which fuel releases the most energy per gram.

Chemistry Plan Aim: To find out which fuel releases the most energy per gram. Scientific Theory: Heat is the transfer of energy between two objects due to a temperature. Heat is lost through the atmosphere because of combustion a process where a substance and oxygen or other elements combine to produce heat and light (fire). Combustion of alcohols produces water and carbon dioxide. Therefore the amount of heat which is not being used to heat the water is lost through the air. There are three types of heat: conduction, convection and radiation. There are a number of ways to control the heat lost, an example is taking tiles and surrounding the fire to decrease the area of the heat that can be lost so more heat is trapped to concentrate on the water. Another way to control the heat is to decrease the distance between the boiling tube and the container. The amount of energy released increases with the number of bonds present in the chemical substance or fuel. That is because each bond has a certain amount of energy stored in it therefore the more bonds the more energy is stored and more energy is released if these bonds break through combustion. ...read more.

Another anomaly was the second try of our ethanol experiments which was way too low compared to the other one so we repeated the experiment and got a try that was closer to our first try which was about 36.5 % of the theoretical value for ethanol, which we found very accurate. And of course both our hexane experiments were very inaccurate meaning they were only about 16.92% of hexane's theoretical value. I think our good results (excluding the anomalies) for all fuels except hexane were very reliable because of their closeness to their theoretical values, but we include the hexane experiments, our results are not very reliable. We could have done better by using tiles to surround the flame from the containers to preserve so of the heat lost in the atmosphere and we could have done more preliminary experiments to find out the best way to attempt this experiment but we did not have enough time. We also could have picked a constant time of heating for all experiments because we had some occasions where we had to change the time of heating since the water was boiling or just went to high or too low compared to the theoretical values and our other tries. Hassan Daoud 10A 3rd of January 2003 ...read more.