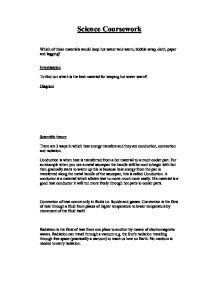 Find out which is the best material for keeping hot water warm?

Science Coursework Which of these materials would keep hot water tank warm, bubble wrap, cloth, paper and lagging? Investigation To find out which is the best material for keeping hot water warm? Diagram Scientific theory There are 3 ways in which heat energy transfers and they are conduction, convection and radiation. Conduction is when heat is transferred from a hot material to a much cooler part. For an example when you use a metal saucepan the handle will be cool to begin with but then gradually starts to warm up this is because heat energy from the pan is transferred along the metal handle of the saucepan, this is called Conduction. A conductor is a material which allows heat to move much more easily. If a material is a good heat conductor it will run more freely through hot parts to cooler parts. Convection of heat occurs only in fluids i.e. liquids and gasses. Convection is the flow of heat through a fluid from places of higher temperature to lower temperature by movement of the fluid itself. Radiation is the flow of heat from one place to another by means of electromagnetic waves. Radiation can travel through a vacuum e.g. the Sun's radiation traveling through free space (practically a vacuum) to reach us here on Earth. No medium is needed to carry radiation. How do we keep warm? ...read more.

This would have caused a greater temperature difference between the hot water and the air temperature and speed around it. This would have caused a greater heat loss. Improving the Investigation If I were to do this experiment again there are several things I would change or add to make it better. I would also use either a digital thermometer or data logging via a computer. A digital thermometer would avoid human error caused by reading off the conventional thermometer. Data logging would also avoid errors because it is done automatically.I think my method was exceptional well done because I took great care and made sure all aspects were covered such as making sure it was started at 75c with 100cm water, making it 6 mins and making sure the material on both beakers was the same amount or near enough the same amount, also I done the experiment twice which enabled me to get 2 set of results which made it a better experiment. I can't think of any bad points which were made or done. If I was to do this experiment again I would do more test which would enable me to have a variety of results, have more material instead of 5, I would have 6 to 7 or to use different thickness of material so see if this would make any difference. ...read more.