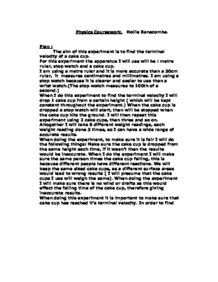 Find the terminal velocity of a cake cup.

The aim of this experiment is to find the terminal velocity of a cake cup.

For this experiment the apparatus I will use will be : metre ruler, stop watch and a cake cup.

I am using a metre ruler and it is more accurate than a 30cm ruler,  it  measures centimetres and millimetres. I am using a stop watch because it is clearer and easier to use than a wrist watch.(The stop watch measures to 100th of a second.)

When I do this experiment to find the terminal velocity I will drop 1 cake cup from a certain height ( which will be kept constant throughout the experiment.) When the cake cup is dropped a stop watch will start, then will be stopped when the cake cup hits the ground. I will then repeat this experiment using 2 cake cups, then three and so on. Altogether I will take 6 different weight readings, each weight reading done 3 times, so I can have a wide range of accurate results.

When doing the experiment, to make sure it is fair

Larger paper cups have more energy than smaller  paper cups when they fall, so larger cups can push air molecules out of the way more easily.

When a cake cup falls there will be friction with the air molecule. If the cake cup slides though the air then the weight will be directly proportional to the velocity so therefore my prediction will be correct.

From looking at my graph, I can see that there is a linear relationship. This graph does not pass through the co-ordinates (0,0)

Another problem that occurred was that when the cake cup fall though the air there was some turbulence. The cup tended to sway from side to side which meant there would not be a constant area, which would obviously effect our results as there would be extra movement from side to side. If I was to do the experiment again, it would be hard to eliminate this error. The only way this could be slightly  improved would be to ensure the best conditions possible to do the experiment in (a wind and draft free place.)

Besides these errors the experiment was successful.

After I had plotted my graph I found that there was one anomalous result, and this could have been because of any of the errors above. I re-tested this result and my new result fitted in alot better than the original result. ( The anomalous result occurred with 4 cups, and the is circled on my graph.)