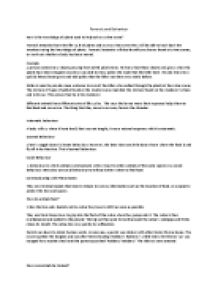 ﻿Forensic and Behaviour How is the Knowledge of plants used to help solve a crime scene? Forensic Botanists learn the life cycle of plants and so at a crime scene they will be able to track back the murderer using the knowledge of plants. Forensic botanists will also identify any leaves found at crime scenes, to work out whether a body has been moved. Example A person noticed new shoots growing from nettle plant stems. He knew that these shoots only grow when the plants have been stepped on and so was able to show police the route that the killer took. He also knew how quickly these shoots grow and told police that the killer was there two weeks before. Pollen is used to provide more evidence to convict the killer who walked through the plants at the crime scene. The mixture of types of pollen found at the murder scene matched the mixture found on the murderer?s shoes and in his car. ...read more.

They use their sharp claws to grip into the flesh of the zebra when they jump onto it. The zebra is then overbalanced and pulled to the ground. The big cat then puts its teeth around the zebra's windpipe and firmly closes its mouth. The zebra dies very quickly by suffocation. Parrots can learn to mimic human words. In one case, a parrot was stolen (with other items) from a house. The owner spotted the burglars and ran after them shouting ?Robbery! Robbery!? A little later, the thieves? car was stopped for a routine check and the parrot squawked ?Robbery! Robbery!? The thieves were arrested. How can animals be trained? Ivan Pavlov thought that the dogs had learned to produce saliva when seeing lab coats because they were fed by people wearing lab coats. To test his theory he rang a bell at feeding time. Soon, the dogs produced saliva just on hearing the bell. Similarities between Human and animal Behaviour. ...read more.

Different types of learning In classical conditioning, a new external stimulus happens at the same time as a stimulus that causes an innate response. The new stimulus then also causes the innate response. Trial and error learning is when animals learn to associate an action with a good or bad event, by trial and error. A rat in a cage might press a lever by accident and get food. It soon learns that pressing the lever will deliver food. Imprinting is a behaviour learned during a short ?window? of time in an animal?s development. For a few hours after hatching, some birds will closely follow the first moving object they see after they hatch. Developing their own recall skills People could try to always put their hands on their heads when they see that someone is trying to punch them. You could also go to martial arts training to improve your reaction time and be more defensive in a fight. Advantages and disadvantages of Behavioural experiments using Humans and animals 1. Some experiments could be dangerous and may cost lives of Humans and animals. 2. We will be able to learn more about the Behaviour ...read more.