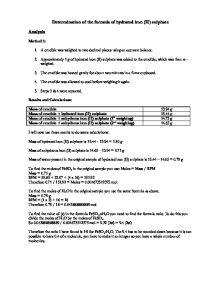 Formula of a hydrated salt

in the formula FeSO4.xH2O you need to find the formula ratio. To do this you divide the moles of H2O by the moles of FeSO4. So 0.075465277778 / 0.0109375 mol = 6.90 (3sf) = 6.9 (2sf). Therefore the ratio I have found is 1:7 for FeSO4:H2O. The 6.9 has to be rounded up because it is not possible to have 0.9 of a molecule, you have to make it an integer so you have a whole number of molecules. Evaluation Overall both my experiments went really well, obtaining accurate and reliable results enabled me to work out the formula of hydrated iron sulphate crystals. I also carried both experiments safely by following the risk assessments and I tried to be as fair as possible. Method 1: This experiment went really well as it was quite accurate and I obtained good reliable results which enabled me to work out the formula of the hydrated iron sulphate crystals. I obtained no anomalous results as I took great care weighting out the mass accurately to two decimal places on a digital top pan balance. When I was heating the hydrated iron sulphate crystals I used a stopwatch to make sure I didn't overheat it. I also reheated the iron sulphate crystals this ensured that all water was vaporised. However, there were still errors in the experiment. One was that there was no specific time for cooling was given, and it stated in the method to heat for "about" two minutes. This could have affected the overall mass reading. ...read more.

The solution inside the volumetric flask seemed to settle down really quick and required regular shakes. When pipetting the solution from the volumetric flask and pipetting it out into the conical flask there was still drops that were inside the pipette. This could lead to inaccurate results. To improve my method and increase the reliability I would use a glass pipette to accurately measure out 20cm3 instead of a plastic measuring cylinder. I could also use a different burette whilst titrating the KMnO4 where the measurement markers stand out more clearly this could minimise errors. I would also use a more pure hydrated iron sulphate crystals as there were many impurities in the crystals I used. I also used a digital top pan balance which measures to more than just two decimal places to increase accuracy and to also make sure the top pan is cleaned and all other substances are removed to prevent inaccurate results and minimise errors. I could also carry out more preliminary and repeat titrations, and gain a more accurate average. This way I could estimate the end point much more precisely To conclude and compare both methods I think that method two was more accurate and reliable than method one. This was because in method one there were no preliminary and maybe not all of the water was vaporised. Where as with method two there was a preliminary titre and repeats where I obtained concordant results straight away. However, there were still errors in method two, which could have affected the accuracy and reliability of the results. ?? ?? ?? ?? ...read more.

The author has carried out two different experiments in order to work out the formula for Hydrated Iron (II) sulphate. They have then compared the two methods and come to a conclusion as to which was the best, as well ...

The author has carried out two different experiments in order to work out the formula for Hydrated Iron (II) sulphate. They have then compared the two methods and come to a conclusion as to which was the best, as well as calculating a correct formula (FeSO4:7H20) in one of the experiments Ã¢â‚¬â€œ the one they decided was the best. They have shown a clear method and have carried out their experiment well (their data has no obvious anomalies, and they have worked out a correct formula). They also repeated the experiment to increase the reliability of their results, and considered the spread of the data when comparing the two methods.

The author has used their results to work out the correct formula for Hydrated Iron (II) Sulphate, and have shown their workings clearly. They have mentioned potential causes of uncertainty, such as the precision of measuring instruments, and used this to suggest improvements to their experiment, although they occasionally conflate the terms Ã¢â‚¬ËœerrorÃ¢â‚¬â„¢ and Ã¢â‚¬ËœuncertaintyÃ¢â‚¬â„¢. Sources of uncertainty are not in themselves errors, but are opportunities for errors to occur. I would have mentioned the greater number of sources of uncertainty in the second experiment due to the larger number of measurements when comparing the experiments, and then compared the percentage uncertainties in each experiment. It may not have been necessary at GCSE to calculate the values of all the uncertainties, but I would have calculated the easier ones such as the precision of measuring equipment (half the smallest measurement possible) in order to gain more marks and be able to compare the experiments more.

The authorÃ¢â‚¬â„¢s spelling and grammar is very good throughout. The report is very well laid out, with clear headings and sections. However, I would have included sections on Ã¢â‚¬Ëœreducing uncertaintiesÃ¢â‚¬â„¢ and Ã¢â‚¬Ëœsafety precautionsÃ¢â‚¬â„¢, rather than briefly discussing them in the conclusion. A report should usually allow the reader to easily carry out the experiment themselves, so this information should be easy to find in the report as it is very important. It may also have been useful to include a labelled diagram of the setup of the equipment for the same reason. Overall, the report is very well written and shows a good understanding of the chemistry involved and an ability to perform complicated calculations based upon real data.