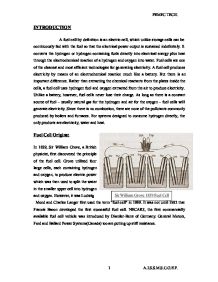 INTRODUCTION A fuel cell by definition is an electric cell, which unlike storage cells can be continuously fed with the fuel so that the electrical power output is sustained indefinitely. It converts the hydrogen or hydrogen containing fuels directly into electrical energy plus heat through the electrochemical reaction of a hydrogen and oxygen into water. Fuel cells are one of the cleanest and most efficient technologies for generating electricity. A fuel cell produces electricity by means of an electrochemical reaction much like a battery. But there is an important difference. Rather than extracting the chemical reactants from the plates inside the cells, a fuel cell uses hydrogen fuel and oxygen extracted from the air to produce electricity. Unlike a battery, however, fuel cells never lose their charge. As long as there is a constant source of fuel - usually natural gas for the hydrogen and air for the oxygen - fuel cells will generate electricity. Since there is no combustion, there are none of the pollutants commonly produced by boilers and furnaces. For systems designed to consume hydrogen directly, the only products are electricity, water and heat. Fuel Cell Origins: In 1839, Sir William Grove, a British physicist, first discovered the principle of the fuel cell. Grove utilized four large cells, each containing hydrogen and oxygen, to produce electric power which was then used to split the water in the smaller upper cell into hydrogen and oxygen. However, it was Ludwig Mond and Charles Langer first used the term "fuel cell" in 1889. It was not until 1932 that Francis Bacon developed the first successful fuel cell. NECAR3, the first commercially available fuel cell vehicle was introduced by Diamler-Benz of Germany. ...read more.

and so on. Available PFSA's have almost all of the necessary properties for a good fuel cell membrane. There are four elements of the polymer electrolyte that can be varied: * Primary structure of the polymer * Morphology of the polymer * Nature of the acid group used * Nature of the medium, such as water, used to foster dissociation and transport of protons within the polymer phase. MEA and Pt-Catalyst : MEA has the generic structure : electrode/electrolyte/electrode, packaged in the orm of a sandwich of three thin films. For catalyst layers containing about 0.15 mg Pt/cm2, the thickness of catalyst layer is close to 10 microns, less than half the thickness of a sheet of paper. MEA, with a total thickness of about 200 microns or 0.2mm, can generate more than half ampere of current for every square cm of MEA at 0.7 volts. Membrane Electrode Assembly(MEA) The function of the electrode is to bring about reaction between the reactant (fuel or oxygen) and the electrolyte, without itself being consumed or corroded. It must also, be an electronic conductor and bring the gaseous fuel, electrolyte and electrode itself to contact. The MEA consists of a solid polymer, proton exchange membrane. A layer of platinum-based catalyst and a gas-porous electrode support material are on both sides of the membrane, forming the anode and cathode of the cell. Applications of PEM Fuel Cells: PEM cells may have a mixed record in space, but several companies have been testing the cells in more down-to-earth vehicles. In 1995, Ballard Systems tested PEM cells in buses in Vancouver and Chicago and later in experimental vehicles made by DaimlerChrysler. ...read more.

Advanced fuel cells using natural gas, for example, could potentially reduce carbon dioxide emissions by 60% compared to a conventional coal plant and by 25% compared to today's natural gas plants. Moreover, the carbon dioxide is emitted in concentrated form, which makes its capture and sequestration much easier. Also, there is good scope for development of fuel cell in India and other developing countries - especially considering their use in fuel cell buses. CONCLUSION "Of all the technologies, the fuel cell car seems to be the most promising; it has the chance of becoming the mass market car", says Bryon McCormick, co-director of General Motors, summing up one of the most important advancements in the automobile industry, spearheaded by fuel cell technology. As our demand for electrical power grows, it becomes increasingly urgent to find new ways of meeting it both responsibly and safely. In the past, the limiting factors of renewable energy have been the storage and transport of that energy. With the use of fuel cells and hydrogen technology, electrical power from renewable energy sources can be delivered where and when required, cleanly, efficiently and sustainable. Since conventional energy sources are exhaustible, renewable energy sources form to be the technology of tomorrow's world. Fuel Cells promote energy diversity and a transition to renewable energy sources. Fuel cells are an environmentally clean, quiet, and highly efficient method for generating electricity and heat from natural gas and other fuels. Fuel cells can also utilize fuels containing hydrogen, including methanol, ethanol, and natural gas, and even gasoline or diesel fuel. Since fuel cells operate silently, they reduce noise pollution as well as air pollution. Fuel cells are creating new markets for steel, electronics, electrical and chemical industries. Thus fuel cells are creating thousands of high quality jobs around the globe in the process. ...read more.