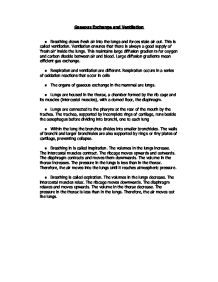 Gaseous Exchange and Ventilation ? Breathing draws fresh air into the lungs and forces stale air out. This is called ventilation. Ventilation ensures that there is always a good supply of 'fresh air' inside the lungs. This maintains large diffusion gradients for oxygen and carbon dioxide between air and blood. Large diffusion gradients mean efficient gas exchange. ? Respiration and ventilation are different. Respiration occurs in a series of oxidation reactions that occur in cells ? The organs of gaseous exchange in the mammal are lungs. ? Lungs are housed in the thorax, a chamber formed by the rib cage and its muscles (intercostal muscles), with a domed floor, the diaphragm. ? Lungs are connected to the pharynx at the rear of the mouth by the trachea. The trachea, supported by incomplete rings of cartilage, runs beside the oesophagus before dividing into bronchi, one to each lung ? ...read more.

But, they do need surfaces for gas exchange as the process of cell respiration and photosynthesis both involve gaseous exchange with the atmosphere. ? The main gaseous exchange surface in dicotyledonous plants is inside the leaves. Root and stem cells obtain most of their oxygen as dissolved oxygen in the water that comes through the water coming through the roots. ? Leaf has a large surface area compared to S.A. ? Oxygen and carbon dioxide enter and leave a leaf via the stomata. There are several thousand stomata per centimetre of leaf. ? Gases that enter the stomata diffuse through intracellular spaces in the mesophyll. ? The surface of the mesophyll acts as the gaseous exchange surface. ? The cell walls are thin and permeable to gases. ? There is less loss of water because the gaseous exchange occurs inside the leaf. ? The gaseous exchange is controlled by two guard cells that can vary the width of the stomata, allowing less or more gas to enter or leave. ...read more.