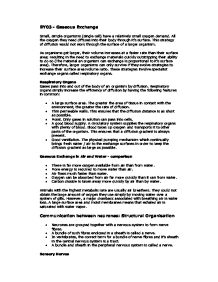 BY03 - Gaseous Exchange Small, simple organisms (single cell) have a relatively small oxygen demand. All the oxygen they need diffuses into their body through it's surface. This strategy of diffusion would not work through the surface of a larger organism. As organisms get larger, their volume increases at a faster rate than their surface area; resulting in the need to exchange materials quickly outstripping their ability to do so (The material an organism can exchange is proportional to it's surface area). Therefore, larger organisms can only survive if they evolve strategies to increase their surface area:volume ratio. These strategies involve specialist exchange organs called respiratory organs. Respiratory Organs Gases pass into and out of the body of an organism by diffusion. ...read more.

Gaseous Exchange in Air and Water - comparison * There is far more oxygen available from air than from water. * More energy is required to move water than air. * Air flows much faster than water. * Oxygen can be absorbed from air far more quickly than it can from water. * Carbon dioxide is taken away more quickly by air than by water. Animals with the highest metabolic rate are usually air breathers. They could not obtain the large amount of oxygen they use simply by moving water over a system of gills. However, a major drawback associated with breathing air is water loss. A large surface area and moist membranes means that exhaled air is saturated with water vapor. ...read more.

Motor Nerves * Motor or efferent nerves contain neurones which take messages away from the central nervous system - the spinal cord or brain via the spinal cord - towards effectors such as muscles and glands. * Most cranial and spinal nerves are called mixed nerves because they are composed of many afferent and efferent nerve fibres. Intermediate nerves * Interneurones in intermediate nerves carry impulses from sensory neurones to motor neurones within the central nervous system. * Interneurones with long axons are called relay neurones and convey signals over long distances. * Interneurones with short axons are called local circuit neurones and convey signals over short distances. * Complex functions such as learning and memory depend on the interaction of thousands of local circuit neurones. Simpler reflexes involve only a few local circuit neurones. * In some reflex arcs, sensory and motor neurones are directly connected. ...read more.