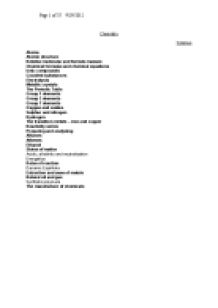 ﻿Page of 9/29/2012 Chemistry Syllabus Atoms Atomic structure Relative molecular and formula masses Chemical formulae and chemical equations Ionic compounds Covalent substances Electrolysis Metallic crystals The Periodic Table Group 1 elements Group 2 elements Group 7 elements Oxygen and oxides Sulphur and nitrogen Hydrogen The transition metals ? iron and copper Reactivity series Preparing and analysing Alkanes Alkenes Ethanol States of matter Acidic, alkalinity and neutralisation Energetics Rates of reaction Dynamic Equilibria Extraction and uses of metals Natural oil and gas Synthetic polymers The manufacture of chemicals ________________ ________________ Atoms The simplest substances from which all other substances are made up are called elements. They are shown in the periodic table and can be represented by a chemical symbol. This consists of one or two letters. The first letter is always a capital letter. Elements can be divided into groups into two ways: 1. Solid, liquid and gas 2. Metal and non-metal Elements combine in fixed proportions to form compounds. The compound sodium chloride is composed of two elements: the metal, sodium, and the non-metal, chlorine. The compound calcium carbonate contains the metal, calcium, and two non-metals carbon and oxygen. All elements are made up of atoms. An atom is the smallest part of an element that can exist. Atoms are made up of protons, neutrons and electrons. All elements are made up of these three basic particles and atoms of different elements contain different numbers of these three particles. Atomic structure Particle Mass Charge Proton p 1 u (u is atomic mass unit) +1 Electron e Negligible - 1 Neuron 1 u Neutral The nucleus of the atom contains the protons and neutrons; they are tightly packed. The nucleus is positively charged. The electrons move around the nucleus in energy levels or shells. Because an atom has no overall charge (they arte electrically neutral) the number of protons in an atom is equal to the number of electrons. ...read more.

By recycling the cooled air several times, liquid air is produced as the temperature continues to fall. Since both carbon dioxide and water vapour turn to solids at low temperatures, they must first be removed; otherwise the ice would block the pipes, thus stopping the process. The gases that remain are nitrogen, oxygen and traces of the noble gases (main argon). Liquid air can then be separated into separate gases through fractional distillation. The temperature begins to rise (from around -200°C); nitrogen boils first at -196°C, followed by oxygen at -186°C. Laboratory preparation of oxygen 1. Assemble the apparatus: A conical flask with a dropping funnel above it and a delivery tube leading to a trough with a beehive shelf and an upturned gas jar. 2. Add about 1g of the catalyst, manganese (IV) oxide to the flask. 3. Add 25cm3 from the dropping funnel into the flask. 4. Collect several jars of oxygen gas over the trough. The gas should: 1. Relight a glowing splint 2. When magnesium ribbon is placed in it, produce magnesium oxide Reactions with oxygen Element Metal Non-metal Acidic oxide Basic oxide Sulphur Yes Yes Magnesium Yes Yes Copper Yes Yes Carbon Yes Yes Magnesium catches fire in oxygen easily. It burns with a blinding white flame to form magnesium oxide (MgO) a white powder. Iron does not burn in oxygen, but the hot metal glows brightly in oxygen and gives off yellow sparks. It produces iron oxide, Fe3O4, a black powder. Copper does not burn, but the hot metal becomes coated with a black substance, copper oxide (CuO). Sulphur burns in oxygen to give the acidic gas, sulphur dioxide. Iron (and steel) react, in the atmosphere, to produce reddish-brown rust. Iron rusts in the presence of oxygen and water. The formula of rust is Fe2O3.xH2O (x is a variable number). The rusting process is an oxidation reaction can be represented by the equation: Fe → Fe3+ + 3e- The iron loses electrons to form iron (II) ...read more.

These conditions are one part nitrogen to 3 parts hydrogen, a high pressure and low temperature. But using a low temperature reduces the rate of reaction. This can be speeded up by using a catalyst. The temperature is 450°C and the pressure used is 200 atmospheres. An iron catalyst is used. 450°C is a compromise temperature- producing reasonable yield reasonably quickly. Each time the gases pass through the reaction vessel, only about 1% of the gases combine to make ammonia. The reaction mixture is cooled and the ammonia condenses as liquid. The unreacted nitrogen and ammonia are recycled. The ammonia is used to make fertilisers and nitric acid. Nitric acid Ammonia is mixed with air and passed over a red-hot platinum-rhodium catalyst. The ammonia is oxidised by oxygen in the air to form nitrogen monoxide. 4NH3 (g) + 5O2 (g) → 4NO (g) + 6H2O (g) Once cooled, the nitrogen monoxide reacts with more oxygen to form nitrogen dioxide. 2NO (g) + O2 (g) → 2NO2 (g) This is finally absorbed in water in the presence of still more oxygen to give nitric acid. 2H2O (l) + 4NO2 (g) + O2 → 4HNO3 (aq) The Contact process Sulphuric acid made in industry in a three-stage process. The first stage is burning sulphur in air to make sulphur dioxide. S + O2 → SO2 The second step is to convert the sulphur dioxide with oxygen to form sulphur trioxide. An excess of oxygen so that the maximum amount of sulphur dioxide is converted, to avoid waste and pollution. The conditions used are 450°C. 1-2 atmospheres is the pressure used as well as V2O5 catalyst. 2SO2 (g) + O2 (g) ↔ 2SO3 (g) In principle the third stage could be reacting sulphur trioxide with water to make sulphuric acid, but this produces an uncontrollable fog of concentrated sulphuric acid. Instead the sulphur trioxide is absorbed is in concentrated sulphuric acid to give oleum. H2SO4 (l) + SO3 (g) → H2S2O7 (l) This is then converted to concentrated sulphuric acid by the careful addition of water. H2S2O7 (l) + H2O (l) → 2H2SO4 (l) ...read more.