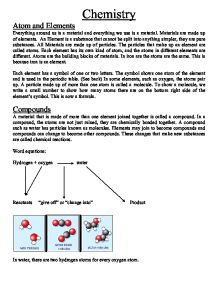 Chemistry Atom and Elements Everything around us is a material and everything we use is a material. Materials are made up of elements. An Element is a substance that cannot be split into anything simpler, they are pure substances. All Materials are made up of particles. The particles that make up an element are called atoms. Each element has its own kind of atom, and the atoms in different elements are different. Atoms are the building blocks of materials. In iron are the atoms are the same. This is because iron is an element. Each element has a symbol of one or two letters. The symbol shows one atom of the element and is used in the periodic table. (See back) In some elements, such as oxygen, the atoms pair up. A particle made up of more than one atom is called a molecule. To show a molecule, we write a small number to show how many atoms there are on the bottom right side of the element's symbol. ...read more.

This shows that water is made from hydrogen and oxygen. The below diagram shows the Hoffman Voltammeter that splits water into its elements using electrical energy. Elements to Compounds If you mix the elements iron and sulphur, you won't see any change. However, if you gently heat the mixture with a Bunsen burner, the elements react. They change into a new substance called iron sulphide. Iron sulphide contains the elements iron and sulphur, but has very different properties. Word Equations: iron + sulphur iron sulphide The reaction The reactants iron and sulphur change in appearance as the reaction takes place. This tells us that a chemical reaction has taken place. The reactants carry on glowing after the Bunsen burner is removed, showing that heat is given out as the new substance forms. We can also check the substance's property to check if a reaction has taken place. Iron- Magnetic Sulphur- Not magnetic Mixture- the iron in the mixture is magnetic Compound- Not Magnetic Reaction with hydrochloric Acid Hydrochloric acid reacts with iron to produce hydrogen gas. ...read more.

If this liquid air is then slowly warmed, the components of the mixture boil off at different temperatures. The gases can be collected and separated from each other. This is known as fractional distillation of liquid air. Separating Mixtures * Filtering to remove solid bits from a liquid * Chromatography to separate substances with different solubilities. * Distillation to separate a solvent from a solution. Changing state When pure water changes state, it always changes at the same temperature. All elements and compounds have a fixed melting and boiling point. Water has a melting point of 0 degrees and a boiling point of 100 degrees. If you have an impure substance (a mixture) , the melting and boiling points change depending on the composition, Impurities tend to raise the boiling point and lower the freezing point. To check if a substance is pure or not, we can melt the substance. If the substance melts quickly, then it is a pure substance. If it melts gradually, then it is an impure substance. Type of Water Boiling point Deionised 100.2 Tap 100.8 Salty 102.5 Pure 100 This shows that salty water has the most impurities, and even shows that our normal tap water has some impurities in it. ...read more.

This is a very well explained, but basic set of notes. It contains very simple science and is easy to read. It would be ideal for someone wanting to go over the fundamentals of chemistry, or for someone of low ability.