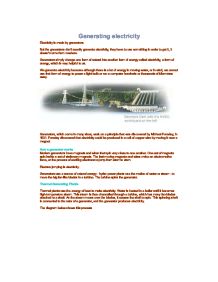 Generating electricity Electricity is made by generators. But the generators don't exactly generate electricity, they have to use something in order to get it, it doesn't come from nowhere. Generators simply change one form of natural into another form of energy called electricity, a form of energy, which is very helpful to us. We generate electricity because although there is a lot of energy in moving water, or in wind, we cannot use that form of energy to power a light bulb or run a computer hundreds or thousands of kilometres away. Generators, which come in many sizes, work on a principle that was discovered by Michael Faraday, in 1831. Faraday discovered that electricity could be produced in a coil of copper wire by moving it near a magnet. How a generator works Modern generators have magnets and wires that spin very close to one another. One set of magnets spin inside a set of stationary magnets. The fast moving magnets and wires make an electromotive force, or the process of exciting electrons to jump from atom to atom. ...read more.

Extracting them and using them had made environmental problems. Strip-mining of coal and oil-spills at sea can have big affects on the environment. Combined-Cycle and Biomass Plants Some natural gas plants can produce electricity without steam. They use turbines like those on jet-aircraft. Instead of burning jet-fuel and producing thrust, however, these units burn natural gas and power a generator. Gas-turbine generators have been popular for many years because they can be started quickly in response to temporary demand surges for electricity. A newer twist is the "Combined-Cycle" plant, which uses gas turbines in this fashion, but then channels the hot exhaust gas to a boiler, which makes steam to turn another rotor. This improves the overall efficiency of the generating plant. Nuclear Plants Although there are some important differences, nuclear power stations are thermal plants that make electricity in mostly the same way as fossil-fuel plants. The difference is that they generate steam by using the heat of atomic fission rather than by burning coal, oil, or gas. The steam then turns a generator as in other thermal plants. ...read more.

Some non-hydro plants can take advantage of periods of low demand by pumping water into a reservoir. When demand rises, some of this water is channelled through a hydro-turbine to generate electricity. Since "peak-load" generating units (used to meet temporary demand surges), are generally more expensive to run than "base-load" units (which run most of the time), pumped storage is one way to boost system efficiency. Wind Power Wind-farms do not need reservoirs and create no air pollution. Small windmills can provide power to individual homes. Air carries much less energy than water but it needs a lot of energy to move the turbines. One needs either a few very large windmills or many small ones to operate a commercial wind-farm. In either case, construction costs can be high; this means that there isn't many wind farms currently in use. Like run-of-river hydro-plants, there aren't many places suitable, like where the wind blows predictably. Even in good places, turbines often have to be designed with special gearing so that the rotor will turn at a constant speed never mind what the wind speed is. Some people are against these places though, as they aren't very nice to look at. Sam Knight 11S ...read more.