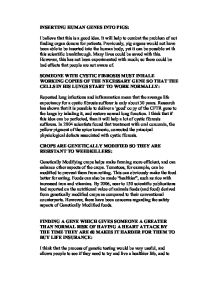 I believe that this is a good idea. It will help to combat the problem of not finding organ donors for patients. Previously, pig organs would not have been able to be inserted into the human body, yet it can be possible with this scientific breakthrough. Many lives could be saved with this. However, this has not been experimented with much; so there could be bad effects that people are not aware of.

SOMEONE WITH CYSTIC FIBROSIS MUST INHALE WORKING COPIES OF THE NECESSARY GENE SO THAT THE CELLS IN HIS LUNGS START TO WORK NORMALLY:

Repeated lung infections and inflammation mean that the average life expectancy for a cystic fibrosis sufferer is only about 30 years. Research has shown that it is possible to deliver a 'good' copy of the CFTR gene to the lungs by inhaling it, and restore normal lung function. I think that if this idea can be perfected, then it will help a lot of cystic fibrosis sufferers. In 2004 scientists found that treatment with oral curcumin, the yellow pigment of the spice turmeric, corrected the principal physiological defects associated with cystic fibrosis.

CROPS ARE GENETICALLY MODIFIED SO THEY ARE RESISTANT TO WEEDKILLERS:

Genetically Modifying crops helps make farming more efficient, and can enhance other aspects of the crops. Tomatoes, for example, can be modified to prevent them from rotting. This can obviously make the food better for eating. Foods can also be made “healthier”, such as rice with increased iron and vitamins. By 2006, near to 150 scientific publications had reported on the nutritional value of animals feeds (and food) derived from genetically modified crops as compared to their conventional counterparts. However, there have been concerns regarding the safety aspects of Genetically Modified foods.

FINDING A GENE WHICH GIVES SOMEONE A GREATER THAN NORMAL RISK OF HAVING A HEART ATTACK BY THE TIME THEY ARE 60 MAKES IT HARDER FOR THEM TO BUY LIFE INSURANCE:

I think that the process of genetic testing would be very useful, and allows people to see if they need to try and live a healthier life, and to take any necessary precautions. However, it is an awkward situation if someone with a greater chance of heart attack needs life insurance. Indeed, there is a greater chance of them dying, but that is not to say that they will die younger.

Genetic engineering is a relatively recent development in Biology, as it relies on knowledge of DNA, the precise structure of which was discovered by Watson and Crick.

One common method is used to produce large quantities of insulin. An enzyme is used to cut out the gene for producing human insulin, from human DNA. Another enzyme is used to cut open a plasmid in a bacterial cell. A plasmid is a short loop of DNA. Another enzyme, called DNA ligase, is then used to fuse the 2 sections of DNA together. When the bacteria divide by mitosis, all of the offspring are genetically identical, and therefore contain the recombinant plasmid. This will produce large quantities of the human insulin.

This is advantageous as it does not carry the risk of side effects.