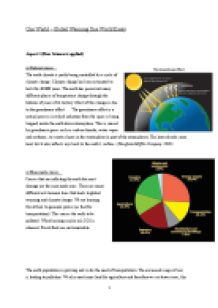 ﻿One World ? Global Warming One World Essay Aspect 1 (How Science is applied) a) Natural causes The earth climate is partly being controlled by a cycle of climate change. Climate change has been estimated to lasts for 40 000 years. The earth has perceived many different phases of temperature change through the billions of years of its history. Most of this change is due to the greenhouse effect. The greenhouse effect is a natural process in which radiation from the space is being trapped inside the earth lower atmosphere. This is caused by greenhouse gases such as carbon dioxide, water vapor and methane , to create a layer in the stratosphere (a part of the atmosphere). The layer absorb some heat, but it also reflects rays back to the earth?s surface. (Houghton Mifflin Company 2005). a) Man-made causes Causes that are inflicting the earth the most damage are the man-made ones. There are many different acts humans does that leads to global warming and climate change. We are burning fossil fuels to generate power (as fuel for transportation). This causes the earth to be polluted .When burning coal or oil, CO2 is released. Fossil fuels are not renewable. The earth population is growing and so do the need of transportation. ...read more.

This might address the negative outcomes associated with global warming in the way that it doesn?t give off any greenhouse gases (which is the main cause of global warming.) If we use renewable energy sources like wind instead of burning of fossil fuel, we can reduce the greenhouse gases that are causing global warming. (Christoffer Longva, Fornybare og ikkke fornybare energikilder, 2007) Aspect 2 (Effectiveness of Science) d) Positive and negative impacts of the solution To use windmills as an alternative way to generate electricity is a solution that had both negative and positive impacts. The solution is very effec tive because the resource is renewable and it doesn?t emit any greenhouse gases which causes global warming. Advantages of my scientific solution Windmills are friendly to the surrounding environment and does not cause pollution. This is caused by the fact that the wind energy is renewable and does not release any greenhouse gases. Therefore, it does not pollute either. Wind turbines and windmills do not take up a lot of space. Compared to most other power machines, it only occupies two square meters for the base. This means that there are space for many windmills and/or the landmark around the windmills can be used for other purposed such as agriculture. The windmills may also be placed out in the sea. ...read more.

On the other side, the windmills are very noisy and unsightly. They create a high sound level which is causing the areas where windmills are located be unpleasant for people to live. The countryside as a part of the environment is being affected in the way that it is not an attractive place to live. (ii) Economic The windmills are expensive and cheap in different ways. The building of the windmills is very expensive. Each windmill has an average cost of between $1.2 million and $2.6 million. (Great Plain Windustry Project 2011) The windmills require the wind to be reliable. The wind can not be too weak or strong. The supply of electricity is unsteady. They are therefore very expensive if they don?t give you the electricity supply you expect. The wind energy is free the resource is to find everywhere in the world. To generate wind to electricity is free. As long as the weather conditions are steady, you are ensured to be generating electricity. This powerhouse is to find everywhere and is a clever way to generate electricity. f) Personal opinion I personally think that the overall limitations outweigh the potential benefits. Windmills are a clever way to generate electricity, but you need to have steady weather conditions in order for the electricity supply to be steady. Other power stations such as the ones burning fossil fuels are more effective. This powerhouse is in contrast worse for the environment and will continue causing global warming. ...read more.