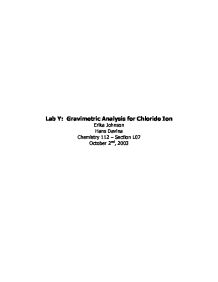 Lab Y: Gravimetric Analysis for Chloride Ion Erika Johnson Hans Davina Chemistry 112 - Section L07 October 2nd, 2003 Introduction: The purpose of this lab is to determine the mass and percentage of the chloride ion in a given solution. A precipitate is formed when any solution that contains the chloride ion is mixed with silver nitrate. The precipitate is silver chloride. The weight of chloride in the solution can de determined by weighing this precipitate and calculating the percentage of chloride present in silver chloride. The percentage weight of chloride in the sample can be determined if the weight of the chloride salt is known. Silver Chloride (AgCl) is a chemical compound. It is a white, cubic solid. Silver chloride is almost insoluble in water and it decomposes into atomic chlorine and metallic silver. Nitric Acid (HNO3) is a strong acid and a powerful oxidizing agent. It has the ability to nitrate many organic compounds. Acetone, or dimethyl ketone, is a chemical that can be found in the natural environment but is also manufactured. ...read more.

6. The solution was removed form the hot plate and cooled until room temperature. 7. Then an extra drop of silver nitrate solution was added to the solution to see if any further precipitate formed. It did not. 8. A clean dry filter crucible was then weighed on an analytical balance. 9. The solution was then filtered through the crucible. A rubber policeman was used to ensure all the solid was out of the beaker (which would result in weight measurement errors). The remaining solid that was stuck to the beaker, the policeman, and the stirring rod were rinsed off using distilled water into the crucible. 10. 40mL of 0.02M nitric acid was rinsed over the precipitate and through the filter. 11. Then 25mL of acetone was washed over the precipitate and through the filter in attempt to dry it. 12. The precipitate was then placed in an oven at 160�C for 15 minutes. 13. The crucible was cooled time, then weighed on an analytical balance. ...read more.

The first common error in data may have occurred by simple human error. There might have been some over or under measuring that could have occurred or some of the sample may have gotten spilled. There may have been some of the silver chloride precipitate still stuck on either the beaker, the rubber policeman or the stirring rod that may not have been washed into the crucible. This would result in a slight error in the weight of the precipitate. Another source of possible error would be that when carrying the crucible, if held in hands rather than in a beaker or tongs, fingerprints and oils from hands may have gotten onto the crucible and would also alter the weight. Conclusion: It was found that the unknown sample #547 contained 52.39% of the chloride ion. This was determined by dissolving the sample in distilled water, acidifying the solution, adding silver nitrate to form a precipitate (silver chloride), weighing the precipitate and calculating the mass of chloride present in the silver chloride. Then using the mass of silver chloride and the mass of the unknown sample, the percentage of chloride ion present in the sample was calculated. ...read more.