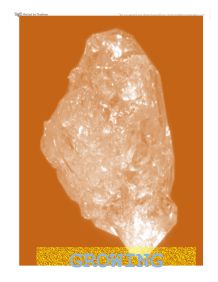 Abstract The aim of this experiment was to determine the effect temperature on the alum crystal growth by altering the dependant variables ranging from an incubator, a freezer and a cupboard in room temperature for ten days. It was hypothesized that the crystal in the incubator would grow the biggest because the solvent will evaporate faster resulting in the crystals to grow faster. After the experiment was conducted, it was concluded that the crystal in the cupboard grew and weighed the largest. There are certain explanations as to why the crystal in the incubator should have grown the largest and other reasons why the experiment wasn't conducted successfully; mainly because the crystals were exposed to the allocated environment for a very short period of time. Introduction The chemical formula for potassium alum is KAl(SO4)2.12H20 signifying that the reaction is composed of potassium, aluminium, sulphate and water (Barthelmy D, 2005). Potassium alum is the most important and most used alum. It is colourless, has a density of 1.76, a transparent diaphaneity, non fluorescent, vitreous and usually forms a large octahedral formation. Potassium alum has a pH of between 2.3 to 2.8 which makes it an acidic (Microsoft Student, 2007) Alum is a cost efficient coagulant used in the treatment of water and wastewater treatment for domestic and industrial purposes. It can remove colour from natural organic matter and turbidity from colloidal matter. Alum reacts with and removes heavy metals such as arsenic and lead. Relating to agriculture, when alum is applied to poultry litter, it greatly reduces phosphorus run off from pastures; alum can also reduce ammonia emissions in poultry houses. ...read more.

The decision of where the beakers are going to be situated in, in terms of the dependant variables of temperature surroundings -incubator, freezer or room - was determined and then the beakers were carefully placed into the allocated environment. Differentiating from 2 or 3 days, the crystals were extracted from the incubator, freezer and room temperature environment and the seed crystals were taken out very carefully out of the beakers for observation. Each seed crystal was weighed on the scale to record the mass and then the dimensions of the seed crystals were measured. Afterwards, the seed crystals were placed back into the beaker and then to the allocated temperature soundings. Results Table 1: Results of the mass of each crystal during the 5 observations Observation 1 Observation 2 Observation 3 Observation 4 Observation 5 Crystals Mass (g) Mass (g) after 2 days Mass (g) after 6 days Mass (g) after 8 days Mass (g) after 10 days Incubator 0.9 8.68 8.90 8.90 9.0 Freezer 0.95 8.23 9.84 9.85 9.9 Cupboard 0.89 12.96 15.44 15.68 15.9 Graph 1: Graph of the masses of the three crystals Crystals Average Mass Increase Incubator 7.28 Freezer 7.75 Cupboard 12.17 Table 2: The average mass increase from the first to last observation Graph 2: The average mass increase of each crystal Table 3: The range of the mass data (Mass of the last observation - mass of the first observation) Crystals Range (g) Incubator 8.1 Freezer 8.95 Cupboard 15.01 Graph 3: The data range for the mass of each crystal Table 4: The dimensions of the crystals from each observation: length x width x height respectively Crystals Dimensions (cm) ...read more.

A logical explanation is that the experiment with the incubator resulted in smaller crystals and the water evaporated, which made it harder for KAl(SO4)2 to find 12 molecules of water in the vessel to form a crystal. There are multiple sources that emphasize that speed is the main factor for a successful crystal growth, meaning the alum crystals should be left to grow for a longer period of time (weeks to months) instead of just 10 days. There are certain factors in the future that can be altered to provide favourable results. One opinion is to make sure students are fully aware on the effect of saturated and supersaturated solutions on crystal growth. Secondly, it is recommended for the length allowed for the crystal to grow to be significantly longer to achieve more grounded and satisfying results. Due to the fact that the melting points for alum crystals is 90oC and the incubator was set to 38oC, it would be worth the chance to increase the temperature slightly greater to see if the increased heat plays a positive or negative role on the growth of crystals. Conclusion The hypothesis stated that the crystal in the incubator would grow the largest and consequently would weigh the biggest and have the greatest volume. It was then observed that the crystal the room temperature sounding weighed and had the greatest volume; 15.9 grams and 9.03 ml. The logical conclusion as to the inconsistent results is due to the very short period the crystal was allowed to grow for and in conclusion the hypothesis was rejected. APPENDIX 1.0 - A diagram of the final step to the method. 2.0 - Alum crystals after 2 days 4.0 - Alum crystals after 8 days 5. ...read more.

The response to the question is done very well. The candidate thoroughly researches and analyses the experiment. Improvements would have been to repeat the experiment or increase the range of experiments that the candidate tested to provide results which ...

The response to the question is done very well. The candidate thoroughly researches and analyses the experiment. Improvements would have been to repeat the experiment or increase the range of experiments that the candidate tested to provide results which had better reliability. This experiment is done to a level I would expect from beyond GCSE level because of the layout of the text, the referencing done and the depth of scientific research.

The candidate includes an abstract which is normally reserved for professional scientific articles so to see this at gcse level is rare. The introduction shows that the candidate researched the crystals and the aspects of the experiment they are going to create to a high level synthesising a number of sources. The method is presented in continuous prose, and this makes it hard for the reader to interpret each step. The make the method clear it should be presented in a series of bullet points or numbers. The user uses a range of graphs to compare their results which is very good because this means they get accurate interpretations from the data. The candidate explains the trends in the graph well and makes a very good explanation about why their hypothesis may be wrong. The candidate also includes images to document how the experiment was carried out which was also good so the reader can picture how the experiment advanced.

The candidate provides proper referencing to a high level of style. The candidate lacks basic commas in places, and sometimes spelling mistakes are present. The style of writing used also makes the text hard to read sometimes. Other than simplistic errors in punctuation, grammar and spelling the majority of the text is fine. The layout of the text is done well but I would have included images from the appendix alongside the results. Referencing is provided as a bibliography at the end of the text in a professional manner.