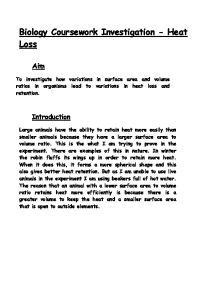 Biology Coursework Investigation - Heat Loss Aim To investigate how variations in surface area and volume ratios in organisms lead to variations in heat loss and retention. Introduction Large animals have the ability to retain heat more easily than smaller animals because they have a larger surface area to volume ratio. This is the what I am trying to prove in the experiment. There are examples of this in nature. In winter the robin fluffs its wings up in order to retain more heat. When it does this, it forms a more spherical shape and this also gives better heat retention. But as I am unable to use live animals in the experiment I am using beakers full of hot water. The reason that an animal with a lower surface area to volume ratio retains heat more efficiently is because there is a greater volume to keep the heat and a smaller surface area that is open to outside elements. ...read more.

0.76/0.43 = 1.767 The predicted difference between the two was 1.742, so from that I can conclude that the experiment was fairly precise. In the insulated results, I can, by again taking the heat losses per minute, see what effect insulating material has on the beakers. 0.66/0.3 = 2.2 The insulation seems to make the larger flask even more heat retentive than before, but the 100ml flask is still not very heat retentive. It also gained less retention capabilities than the larger flask did. Conclusions I can conclude from these results that the original predictions were fairly accurate. So this means that it is true that the lower the surface area to volume ratio the better the heat retention. Evaluation There are a number of factors that could be improved the next time I do this experiment. I could have been more precise in my measurements and timekeeping. Also, I could have made sure that the insulating material was the same thickness on both beakers. ...read more.