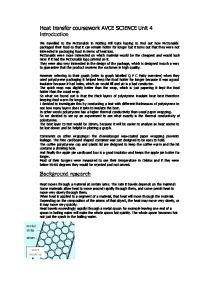 Heat transfer - We travelled to the McDonalds in Notting Hill Gate hoping to find out how McDonalds packaged their food so that it can remain hotter for longer but it turns out that they were not interested in packaging food in terms of heat loss.

Heat transfer coursework AVCE SCIENCE Unit 4 Introduction We travelled to the McDonalds in Notting Hill Gate hoping to find out how McDonalds packaged their food so that it can remain hotter for longer but it turns out that they were not interested in packaging food in terms of heat loss. McDonalds were more interested on which material would be the cheapest and would look nicer if it had the McDonalds logo printed on it. They were also very interested in the design of the package, which is designed in such a way to guarantee that the product receives the customer in high quality. However referring to their graph (refer to graph labelled Q P C Patty overview) when they used polystyrene packaging it helped keep the food hotter for longer because it was a good insulator because it had holes, which air would fill and air is a bad conductor. The quick wrap was slightly better than the wrap, which is just papering it kept the food hotter than the usual wrap. So what we found out is that the thick layers of polystyrene insulate heat best therefore keeping food warm for longer. I decided to investigate this by conducting a test with different thicknesses of polystyrene to see how many layers does it take to insulate the best. In other words polystyrene has a higher thermal conductivity than usual paper wrapping. So we decided to set up an experiment to see what exactly is the thermal conductivity of polystyrene. The best layer to test would be 20mm, because it will be easier to analyse as heat seems to be lost slower and be helpful in plotting a graph. Comments on other wrappings: The cheeseburger wax-coated paper wrapping prevents leakage. The fries cardboard shaped container was just designed to be easy to hold. The coffee polystyrene cup and plastic lid are designed to keep the coffee warm and the lid contains a drinking hole. ...read more.

Equipment needed: none By when will this task be completed? 26/03/01 PLAN: AIM The aim of this experiment is to calculate constant k or thermal conductivity of polystyrene; this can be achieved from the experimental results that are obtained. I am going to investigate how heat loss can be controlled through insulation. I want to find out how many rolls of polystyrene are going to insulate the most. The measurement of a material to conduct heat is called its thermal conductivity. To test the first can I am going to fill it up with 330ml of boiling water. We will use a more precise method by measuring the water with measuring cylinders. This is because we want to get accurate results so we use the appropriate instruments to perform our tasks. Objectives * To calculate K value of Polystyrene * To get reliable results that will help me make a conclusion * To meet the deadline that I was set * To control variables, such as temperature and heat loss * To reduce heat loss from the top of the can through the form of convection I will need to seal the container very firmly to stop water vapour from escaping. * Reduce the amount of heat loss from the can itself The way I could tackle the problem of heat loss is to place an asbestos mat below the can to stop the can losing heat from conduction. An asbestos mat acts as being heat proof and stopping the can conducting heat to the surroundings from the bottom of the can. The most important objectives of the experiment is to repeat the 20 minute long experiment twice, this is to get the best possible results to help us later on calculate thermal conductivity. Hazards The main hazards are the breakage of glass, hot water spillage causing scalds, or thermometers breaking which contain mercury that could lead to dementia if inhale and is poisonous if absorb through the skin. ...read more.

I predict that the more rolls of polystyrene we have the less the heat transfer. This is because polystyrene is an insulator and traps in heat. The measurements we will use are time in minutes and temperature in �C. Each experiment will be taken out twice including the averages, which should help us come to a conclusion. Heat, which passes throughout a solid body by physical transfer of free electrons and by vibration of atoms and molecules, ends flowing when the temperature is alike at every point in the solid body and equals the temperature in the adjoining environment. In the procedure of reaching equilibrium, there is a gross heat flow through the body that depends on the temperature variation among different points in the body and on the magnitudes of the temperatures implicated. Thermal conductivity is experimentally calculated by determining temperatures as a task of time down the length of a can while concurrently controlling the exterior input and output of heat from the surface of the can. Changes made to plan The equipment wasn't very accurate and wasn't sufficient enough to keep the water inside warm. Most of the time the water had dropped down in temperature as soon as it was poured into the can. The way this problem was dealt with was to heat the water twice, which would give it a temperature higher than 90 degrees, which is our starting temperature. Then we would wait until the temperature was 90 degrees and then start the experiment. The room temperature was different everyday that is something that could have seriously affected our results. We had to close the window and consider altering our results with respect to the change in room temperature. We had less than two weeks to do the experiment, which was a time constraint, so we had to finish the experiment quicker. Finishing the experiment quicker was a benefit temperature wise, because the more we would complete in one day the more our results wouldn't differ very much. ...read more.