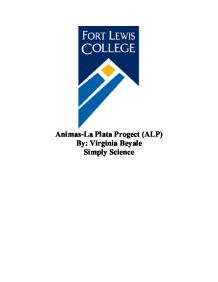 History of the ALP Project.

Animas-La Plata Progect (ALP) By: Virginia Beyale Simply Science History of the ALP Project The Animas-La Plata Project (ALP), situated in La Plata and Montezuma Counties in southwestern Colorado and in San Juan County in northwestern New Mexico, was approved by the Colorado River Basin Project Act of September 30, 1968. It supplied for a multi-purpose project primarily for irrigation and municipal and industrial utilization. Although scheduled for construction, in the early 1980s, negotiations were initiated to accomplish a negotiated settlement of water right claims of the Southern Ute Indian and Ute Mountain Ute Tribes in southwest Colorado. The Colorado Ute Tribes and other parties subsequently signed the Final Settlement Agreement on December 10, 1986. The Colorado Ute Indian Water Rights Settlement Act of 1988 (Settlement Act) supplied language to implement the Final Settlement Agreement and supplemented the permission of the ALP. The Settlement Act permitted for future expansion of the region and at the same time sheltered existing water uses. In 1990, founded on new biological information, and identifying the potential of ALP to affect endangered species like the Colorado pike-minnow, the Fish and Wildlife Service issued a draft biological opinion with no logical and practical alternatives. A final Biological Opinion was issued on October 25, 1991, enclosing a Reasonable and Prudent Alternative that would permit construction of several ALP features, but restricted project depletions to 57,100 acre-feet while an endangered fish recovery program was performed. ...read more.

There are seven entities that will take advantage directly from the construction of the Project and the storage of water in Ridges Basin Reservoir. These are: 1) Southern Ute Indian Tribe, 2) Ute Mountain Ute Tribe, 3) Animas-La Plata Water Conservancy District, 4) State of Colorado, 5) Navajo Nation, 6) San Juan Water Commission and 7) La Plata Conservancy District. Others who profit from the project comprise of: non-Indian water users whose water rights are no longer in jeopardy due to fulfillment of the obligations of the Colorado Ute Indian Water Rights Settlement and recreation users, both on Ridges Basin Reservoir and the Animas River. Environmental & Economical Impacts Aquatically speaking, the pumping capacity of 240 cfs could or would have a negative impact on the trout and native fish in the Animas River depending on the timing and extent of pumping. Last summer archaeological surveys conducted within Ridges Basin and the other features composing the Alternative 1 pointed out that there could be substantial impacts. Data indicated that approximately 60 cultural resource sites are located within the defined features of Alternative 1. If you are wondering what will happen to the Native American artifacts in the basin, ALP promised all artifacts from Ridges Basin will be transferred to the Anasazi Heritage Center in Dolores, CO for permanent restoration. ...read more.

The location of the Durango Pumping Plant was chosen for environmental and economic reasons. This location is 50 to 100 feet lower than other alternatives routes that were evaluated. Consequently, the pumping cost would be less at this location and the environmental disturbance would also be minimized. At present, evaluations continue regarding moving the City's Sewage Treatment Plant discharge downstream from the Durango Pumping Plant. What is the current estimated total construction cost of the project? The total estimated construction (January 2003 price level) is estimated at $500 million and in which I believe has gone up even more. How this project is Significant to Me I related to this project because I believe constructing a 500 million dollars water project is outrageous and the money can be used better spent toward something more beneficial for all of us. To even be more tied into my life, my father is the Superintendent of Navajo Tribal Utility Authority (NTUA) in which we had some head controversies along the way of my researching. He is so motivated to get this project in progress. I guess we just look at this in different eyes, one as a college student and one as a provider for our Navajo Nation. Although we saw the beneficiaries and negative impacts of what the project has in store, we still stuck to our initial opinions. This has been a valuable learning experience for me. Thank you for the opportunity. ...read more.