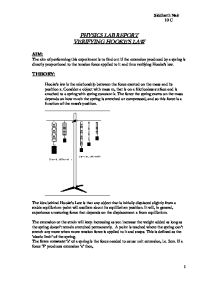 Hooke's law is the relationship between the force exerted on the mass and its position x. Consider a object with mass m, that is on a frictionless surface and is attached to a spring with spring constant k. The force the spring exerts on the mass depends on how much the spring is stretched or compressed, and so this force is a function of the mass's position. 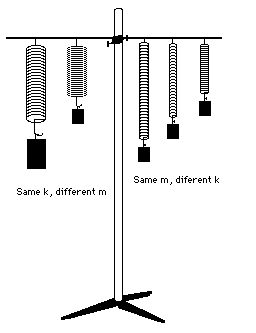 The idea behind Hooke's Law is that any object that is initially displaced slightly from a stable equilibrium point will oscillate about its equilibrium position. It will, in general, experience a restoring force that depends on the displacement x from equilibrium.

The extension or the strain will keep increasing as you increase the weight added as long as the spring doesn’t remain stretched permanently.  A point is reached where the spring can’t stretch any more when more tension force is applied to it and snaps. This is defined as the ‘elastic limit’ of the spring.

Length after adding weights on spring 2:

The ruler was attached to the clamp stand to make the experiment more efficient. However, it was observed that it was not in a straight line thus causing some inaccuracy in measurements. All the weights were not re- weighed thus causing certain inaccuracies in terms of the force applied resulting in errors.This would have caused extra force to be applied and the exact measurements could not be taken.

From the experiment done above it is proved that the Hooke’s is proved right for a spring. This is because the extension is directly proportional to the force applied. From graph 1 it can be seen that the results were accurate and that Hooke’s law was followed. Whereas, for graph 2 this law didn’t completely prove to be right due to certain errors. Therefore, overall my experiment was successful as Hooke’s law was verified right and it did apply to a spring.

The author has successfully carried out an experiment confirming that HookeÃ¢â‚¬â„¢s law is true. They have considered the results when two springs were used, although they fail to give an accurate description or diagram of this experiment to show whether ...

The author has successfully carried out an experiment confirming that HookeÃ¢â‚¬â„¢s law is true. They have considered the results when two springs were used, although they fail to give an accurate description or diagram of this experiment to show whether these springs were used in parallel or series. They have produced graphs which clearly show the relationship between Force and Extension, although these should have been properly labelled. I would also have added uncertainty bars Ã¢â‚¬â€œ at GCSE these may not be essential, but they have already worked out the uncertainties anyway, so may as well add them to the graphs. This would have allowed them to more easily identify any anomalies, although there donÃ¢â‚¬â„¢t appear to have been any in their experiment.

The author has analysed their results to come to the conclusion that HookeÃ¢â‚¬â„¢s law is true. They have considered causes of uncertainty in their measurements, and used this to suggest improvements in the experiment. However, in their place, I would have continued the experiment up to the limit of proportionality in order to be able to compare the springs better and discuss how HookeÃ¢â‚¬â„¢s law only works up to the limit of proportionality. I would also have calculated the spring constant (the gradient of the graphs) in order to see the effect using two springs had on the results. The author has shown in many places a good understanding of the physics involved, although they occasionally confuse terms, such as extension and strain Ã¢â‚¬â€œ extension is the increase in length, whereas strain is extension/original length, which gives a fractional value for the Ã¢â‚¬ËœstretchÃ¢â‚¬â„¢ of the spring. They have also made some flaws in their analysis such as saying Ã¢â‚¬Ëœspring 1 is more flexible as it does not produce anomaly resultsÃ¢â‚¬â„¢, which is incorrect Ã¢â‚¬â€œ the lack of anomalies shows that the experiment was carried out more accurately, with reduced uncertainties. They have shown their workings for calculating the Force exerted on the string from the masses added, which is very easy to forget to do in the write up of an experiment, but very important.

They have generally shown good grammar and spelling throughout Ã¢â‚¬â€œ with only a few Ã¢â‚¬ËœtyposÃ¢â‚¬â„¢ such as Ã¢â‚¬ËœnadÃ¢â‚¬â„¢ instead of Ã¢â‚¬ËœandÃ¢â‚¬â„¢. They have used scientific terms usually correctly, with a few notable mistakes, for example they described the elastic limit as the point where the spring snaps Ã¢â‚¬â€œ the elastic limit is actually the point after which the spring undergoes permanent deformation under stress, and so will no longer return to its original shape once the stress is removed. They have at times shown a lack of knowledge about Physics conventions Ã¢â‚¬â€œ for example they used 10ms-2 as the acceleration due to gravity, when it is more accurate and customary to use 9.8(1) ms-2 for this figure. They have also laid their report out rather unusually Ã¢â‚¬â€œ it is much better to describe the experiment logically and more chronologically, beginning by describing the aims of the experiment and a hypothesis, then a clear diagram and description of method (including Ã¢â‚¬Ëœfair testÃ¢â‚¬â„¢ and Ã¢â‚¬Ëœsafety precautionsÃ¢â‚¬â„¢ sections), followed by a table of results and graphs. This should be followed by an analysis of results and conclusion, and then some suggestions for improvement. As the author has redone the experiment with these modifications, the second experiment should be written up as before, like a new experiment, then the whole thing concluded by a comparison of the two methods. This would have made the experiment much easier to follow and understand, and is, in my experience, essential for gaining good marks. However, the experiment was directly related to HookeÃ¢â‚¬â„¢s law and was clearly carried out well, which helps to make up for the poor layout.