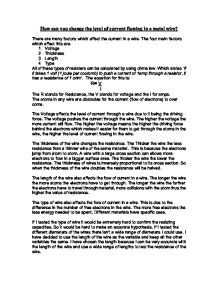 How can you change the level of current flowing in a metal wire?

How can you change the level of current flowing in a metal wire?

All of these types of resisters can be calculated by using ohms law. Which states ‘If it takes 1 volt (1 joule per coulomb) to push a current of 1amp through a resistor, it has a resistance of 1 ohm’.  The equation for this is:

The R stands for Resistance, the V stands for voltage and the I for amps.

The atoms in any wire are obstacles for the current (flow of electrons) to over come.

The type of wire also affects the flow of current in a wire. This is due to the difference in the number of free electrons in the wire. The more free electrons the less energy needed to be spent. Different materials have specific uses.

This will be repeated for each length of wire three times to ensure that the results are accurate.

I decided to do a set of preliminary results I will use these results to ascertain whether or not the range of the lengths of wires I have chosen are viable to use in my experiment.

The preliminary shows that the range of the measurements I have chosen are very feasible to test.

These are the other results I collected. I used a 34 gauge wire constantan wire which was charged at a voltage of 2 volts.