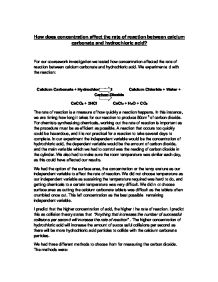 How does concentration affect the rate of reaction between calcium carbonate and hydrochloric acid?

For our coursework investigation we tested how concentration affected the rate of reaction between calcium carbonate and hydrochloric acid. We experimented with the reaction:

The rate of reaction is a measure of how quickly a reaction happens. In this instance, we are timing how long it takes for our reaction to produce 50cm3 of carbon dioxide. For chemists synthesizing chemicals, working out the rate of reaction is important as the procedure must be as efficient as possible. A reaction that occurs too quickly could be hazardous, and it is not practical for a reaction to take several days to complete. In our experiment the independent variable would be the concentration of hydrochloric acid, the dependent variable would be the amount of carbon dioxide, and the main variable which we had to control was the reading of carbon dioxide in the cylinder. We also had to make sure the room temperature was similar each day, as this could have affected our results.

I predict that the higher concentration of acid, the higher the rate of reaction. I predict this as collision theory states that “Anything that increases the number of successful collisions per second will increase the rate of reaction”. The higher concentration of hydrochloric acid will increase the amount of successful collisions per second as there will be more hydrochloric acid particles to collide with the calcium carbonate particles.

We had three different methods to choose from for measuring the carbon dioxide. The methods were:

Method 2: Timing how long it takes for a solid to dissolve

Each method has its drawbacks, however. Method 2 had a large scope for human error as it is extremely hard to tell when the calcium carbonate table has dissolved. Method 3 did not work as the scales were not accurate enough, and the changes in mass were not drastic enough to come up with a conclusion. This left us with method 1 as our chosen method. For this method we needed the following equipment:

This is a step by step guide to our method:

For our experiment we had to take several safety precautions. When we were handling the hydrochloric acid we made sure that we were extremely careful, and if we did spill and of the solution onto our hands, we made sure to wash it off very quickly, as hydrochloric acid is extremely corrosive. We also wore goggles whilst the experiment was taking place in case any of the solution may have managed to shoot into our eyes.

Our preliminary experiments helped us decide several things about our method. For instance, we started off by saying that we would take a measurement every 10 seconds, but after our first experiment (100% HCl, 0% H2O) only took 15 seconds to complete. We then decided on taking a result every 2 seconds, however, by the time we got to our last experiment (20%HCl, 80% H2O) we tookfar too many meaningless measurements, where there was no change in the amount of CO2.

There were certain control variables which we had to make sure did not affect our results. The main control variable which we could not control was the room temperature. Temperature affects the rate of reaction as explained in Collision theory. Increasing the temperature would increase both the number of collisions per second AND the percentage of successful collisions. However, to make sure that the room temperature had as little affect as possible. We took all of our measurements in the summer, and every day we measured the room temperature to make sure that there was no major difference between days. The other main control variable was human error, which we could control by taking our time, not hurrying and staying focused during our experiment. We also repeated every experiment 5 times to identify outliers and eventually give a mean and ranges. Whilst repeating the experiment does not make it a fair test, it does make the results more reliable.

This is our results table:

The results were drawn up after outliers had been removed. These outliers were probably caused by human error, as few other variables could have affected the experiment.

From these results we managed to work out the rate of reaction. This is our table:

This shows us that the rate of reaction decreased as the concentration of HCl lowered.

I believe that the data we obtained from our experiments was as reliable as possible.  We made sure that our experiment was a fair test, and we repeated the experiment five times too add reliability. Of course, our results did obtain several outliers, all of which were removed from our final table, and were omitted in working out the means and ranges. The results we obtained we fairly consistent, with all of the results having a range of no more than 10cm3 Carbon Dioxide except the results for the 50% Carbon Dioxide, 50% Water solution. This result had much larger ranges than other experiments. This is probably down to human error, as there was no large difference in temperature that day. However, there could have just been some strange results, and there was no human error which affected the results.

I believe that my conclusion is somewhat limited due to the amount of results. Due to time pressures, we could only do 5 experiments per solution, meaning that the data is not as reliable as possible. I believe that 10 repetitions would be a good amount, as it would be easier to identify outliers and you would get a more accurate average. We could tell from our results that after 5 seconds, there was a real difference in the results (Excluding the 50% Carbon Dioxide, 50% Water solution) as none of the rages overlapped. Checking if the ranges overlap is commonly regarded as the best method to see if there is a real difference in the results.

Out of the three possible methods, I believe that we chose the most precise one which gave the most accurate results. Our preliminary experiments showed us that method 1 was the best possible method as we found many problems with the other methods. Method 2 had too large a scope for human error, due to the majority of the experiment relying on human judgement. Method 3 was not feasible as the scales we had available were not accurate enough for our experiment. Also, there was too little a change in mass to be able to draw a conclusion.

I believe that my conclusion is not hindered by the accuracy of the equipment, but more by the equipment used. The measuring cylinder measured in cm3, which I found accurate enough. If it measured in mm3 than it would have added accuracy, but would probably not have changed much about the conclusion. However, using a gas syringe would have greatly improved the reliability of the results more than mm3.

Another aspect which may have limited my conclusion is the range of data I obtained. Whilst the ranges did not overlap, showing a real difference in the assorted solutions, I would have preferred to have had smaller ranges, meaning more accurate results. I believe that the easiest way to have done this would have been to have done more repetitions of the experiments, so that it would have been easier to identify outliers and make the results more accurate and reliable.

Overall, I believe that I have enough evidence to support my conclusion, however different equipment and more data would give me a more confident and precise conclusion.